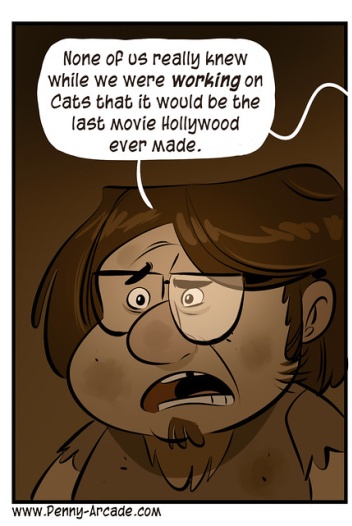 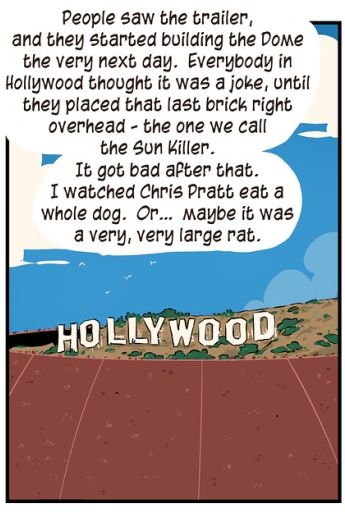 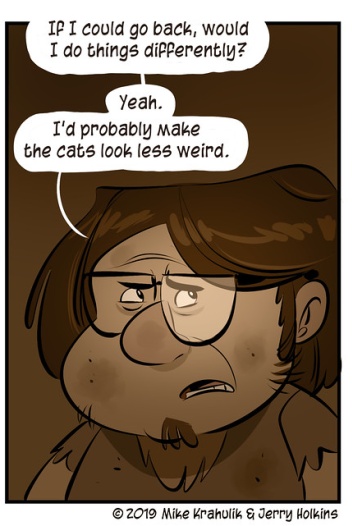 We have a strip about it later this week, all of this SDCC-ness, but man. I think going to it as long as I did, particularly in the way that I did, messed me up somehow. It remains now in the form of a recurring Naked School dream, a succession of interpersonal challenges each a little more beyond my ken, coupled with the constant, jungle awareness of a low level, perfectly plain, but plausibly deniable enmity. Also, if you want to see the blue blood crawling beneath a person's face, the lighting there is optimally calibrated for it.

Occasionally a dangerous particle escapes from the show, something for which flesh is no obstacle; something whose "shape" is inimical to life. I felt the diamond prow of social media consensus cut the wake even here, entombed in the real, and I sensed its gathering weight: the Cats trailer, it seemed, was kinda weird.

What manages to survive the deadly gauntlet of production is often a surprise to me, some of it is so counterintuitive that it seems like there must be some deeper lore that has simply never been exposed to me. As in... is making bad movie a form of crop rotation? That is to say, is a bad movie required to return conceptual nitrogen to the soil or something? Or is it simply that weird conservatism, the same caustic force that has given us these ill-advised live action remakes, where you make a movie you shouldn't simply because someone has heard of "Cats" before and ?

The truth, though, is that I would watch Idris Elba play a tree. So maybe they're much smarter than I give them credit for.

I'm out of the office all week, not that it will effect the post or comic any, but with Acquisitions Incorporated: The "C" Team on break for a couple weeks I'm trying to achieve something like relaxation. I'm incredibly bad at it. It feels like everything is plugged in backwards, for me; I can only relax if I'm working. If your identity is wrapped up in your work, or if your work is an extension of your identity, I suspect it's fine until it isn't. I haven't had to pay the backend of this configuration yet and I'm excited to discover its parameters. But Josh and his tireless Stream Boys will make sure you're well taken care of on the Twitch Channel while I'm gone.