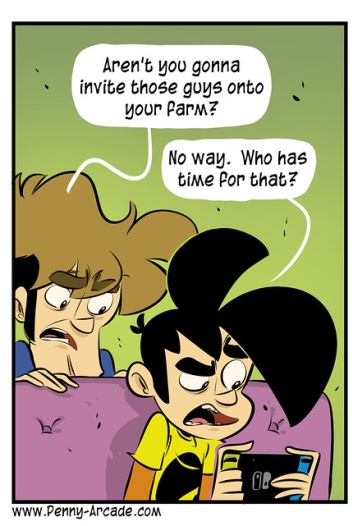 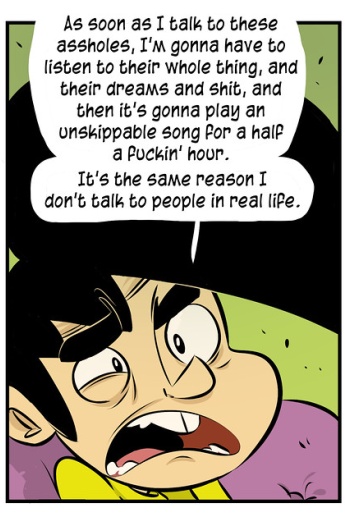 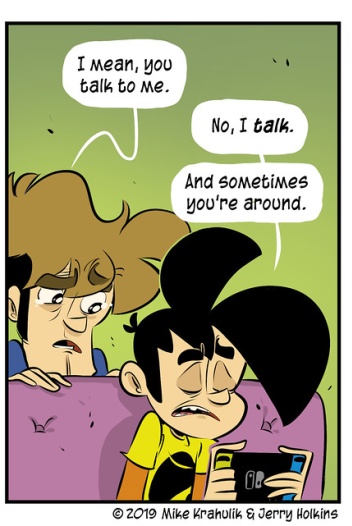 I wasn't aware that there even was a designation for cellular data called H+, and I've had the "opportunity" to discover this dessicated realm while trying to approximate relaxation. Whenever I leave home for something, it's generally been an opportunity to discover where Google Fi isn't.

Every strip we've done about Dragon Quest Builders 2 has been based directly on a conversation we've had about it. We overlap on multiplayer stuff sometimes, but for single player games we're almost never playing the same one at the same time - when it does happen typically it's something like a baton pass, where one of us makes a passionate entreaty once we've completed something, and the other takes it up.

DQB2 exists in a fraught and splintered dimension, where it features multiplayer - it's part of the game - but I think there are a nontrivial amount of people who might never even get to it. It's... a startling amount of time to unlock it. It's probably for the best; it's important to know what you need to in order to be a gracious guest, or for that matter, host. But there is an entire game's length of content before you can access any of it.

It's been established that I made homes for my villagers out of haunted mud. I own that. In his world, he didn't talk to a group of farmers purely because it would take too long. And he's not wrong, it really does. It's happened: somebody has made a game where it's my default behavior to skip the text. Playing it during a stream, we theorized that there's simply a number of hard-coded text panes in from the original version and they had to be filled come hell or high water. There is a class of text that can't even be sped up, there isn't even an interface associated with it, and the song it plays when people join can't be skipped for some reason. I'm not saying they need to be dragged before a tribunal or something but I don't think you can do this kind of shit anymore.

The content of these text boxes can also profoundly repetitive in a way that borders on insulting. I've heard it suggested that this is all meant for children, and so it's appropriate and expected for it to be so didactic, but to be perfectly frank with you this is the sort of thing a grown-up would day about children. Children do not want this shit. Children can make a portal to the Nether when they are still pre-verbal. I guaran-God Damn-tee you they aren't interested in the type of jacking off the writers are doing here.

On the second adventure island, there's group of people who - I think - are intended to be so British that it's difficult to understand them. This britishousness is so potent that it warps the very spelling of words so that you never forget how profoundly British they are. I can get behind that to a certain extent. I think "wot" is is of sufficiently distinct character from "what" that I endorse its usage here and elsewhere; it has a shibboleth quality. Where I can't follow them is when they change the way a person's name is written. I stumbled over this for the duration of that second chapter, possibly because I'm stupid, but also because that is a substantially different use case that has ramifications for legibility. I understand that they were committing to the bit, which awards them a partial high five. This is a high-five where there is no contact. Afterward, the hand simply returns to the side.

None of this has stopped me from playing or even enjoying the game. These habits of theirs are annoying for sure but combining Minecraft with story beats and little AI friends who live, work, and play in places you define with crafted items is bewitching. It's not Minecraft, I mean, for good or ill. But we have to call it good on the whole, so good that I want it to live. I want to come back to it years hence, when the number after it has changed, and perhaps my own number, to recognize each other as friends and then carry on right where we left off. 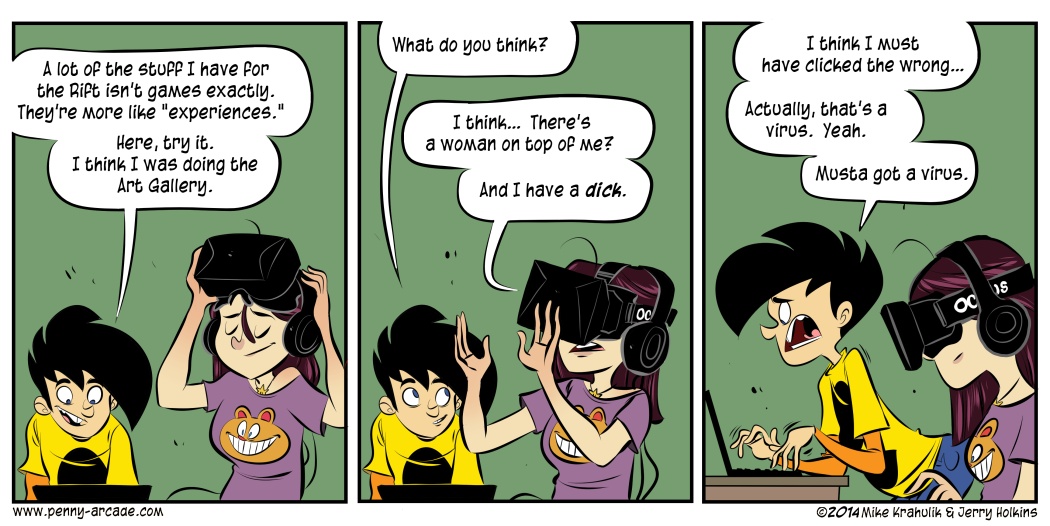