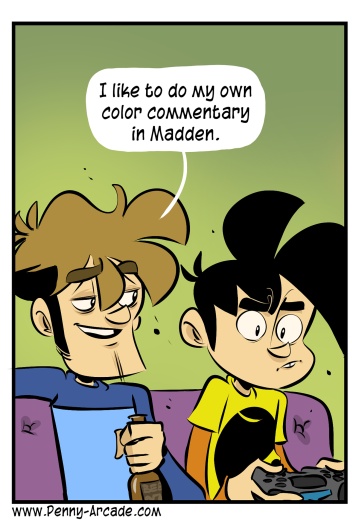 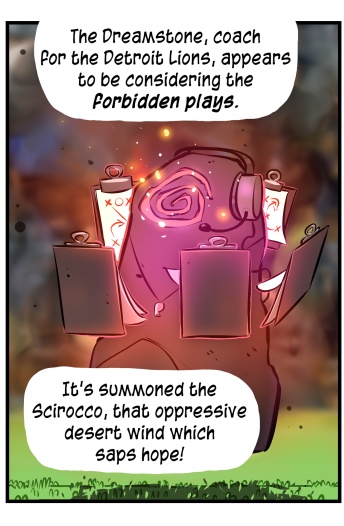 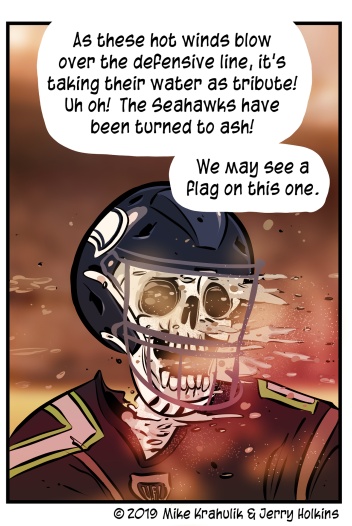 We've streamed Madden stuff a few times, and invariably things shift into the eldritch for me. That's more or less par for the course, I guess - I'm always trying to bend shit in a mythos direction anyway. But sports can absorb an incredible volume of these concepts because the human narratives underpinning them are so strong.

I get into football sometimes during the actual season, but I don't actually like how it makes me feel. By half-time, I'm like the twisted revelers in a Bath Salts video - chittering at the screen and demanding that dogs just listen. I avoided it forever because I saw it as some kind of proxy for other things I didn't like, but by the time I came to it on my own I had to limit access to it because it is too fucking exciting. Jeff Kalles here at Penny Arcade watches Football on three screens simultaneously, there's a teevee and then a subscription Red Zone thing and then there's a Fantasy Thing also I think. I respect it, I honor it, and I can see it from my current position. I'm swerving around.

I sublimate these Sporting Urges primarily through wargames, which have a lot in common with these dynamics even when they aren't explicitly sports related - there's a lot to appreciate about Games Workshop's Kill Team or Warcry's take on season play between teams of asymmetrical ability, and Blood Bowl, DreadBall, and Guild Ball all model strange sports directly, though that doesn't necessarily mean they're less lethal.

My friends who ended up an GenCon brought something back in this vein, "Aristeia!," that delivers something like character shooter in the vein of Overwatch that takes place in a sporting arena with dynamic goals. It's from the company that did Infinity, Corvus Belli, so I was already inclined to investigate. You gotta take a look - it's got Wargame style figure crafting and painting, plus deckbuildy force composition from a huge set of models, similar to the a character select screen. What it means as a practical matter is that even though I didn't even go to GenCon it's still, somehow, going to be very, very expensive.