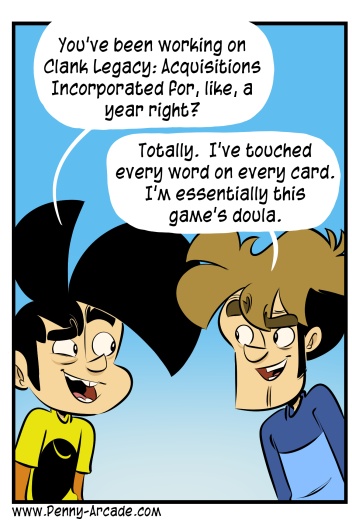 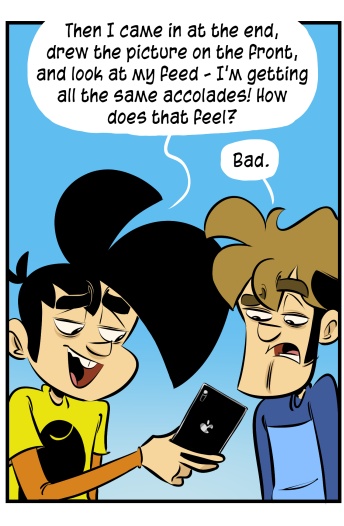 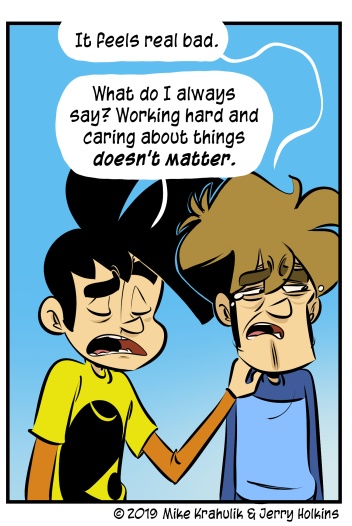 I occasionally get a feeling that I've learned to pay very close attention to. I was walking around Brenna's campus when I was visiting out there a while back and I just started to laugh. Enough phenomena had adopted a fortuitous angle that it wouldn't be impossible to pay rent off of Penny Arcade. Improbable, maybe. But that's a gulf you can fill. My metaphor doesn't have you filling that with planning or youthful enthusiasm or anything like that. In my version, the one I've lived, you fill it with failure. You fill it with so much failure that, ultimately, you just... walk across.

I think that the feeling is the result of a subconscious matrix of factors. I'm not trying to get woo woo or anything. I just think that once things achieve a kind of superposition it's possible to be aware of its auspicious nature. Then, you know, all you have to do is throw your life in the garbage based on a dream.

So, my job is weird now - much weirder than it used to be, and it was already pretty fuckin' weird. I used to make comics and name things. And, I guess, play Myself in various real space locales. I didn't have anything approximating operational control. As soon as I got it, I used it to join teams of people - inside or outside Penny Arcade - that could make ridiculous shit. For example: an official Acquisitions Incorporated book that honors the decade of stories we've put together, while giving you what you need to tell your own. I will never tire of emphasizing that this is an official book. It required a team of global experts, like a high-stakes museum heist. But we were working on something else at the same time.

I've wanted to do something with Dire Wolf since I'd met a few of them in a previous incarnation, that of SOE Denver, cranking out digital CCGs for settings like Everquest and… Stargate, for some reason. I didn't watch Stargate and I didn't play Everquest, but I was obsessed with both of those games. I kept in touch, and said if they ever wanted to put something together they should let me know, but I was thinking something in the digital space like they've done with Eternal or the Pokemon TCG. When they ended up having a surprise hit on their hands with Clank!, the possibility space for a collaboration got somewhat wider.

First we were thinking about a version of Clank - they'd done that before, with Clank! In! Space! so it occupied a conceivable realm. But then I asked if it could be a legacy game, and if you could keep playing after the story was done, which now that I think back on it might have been rude. But it sounded interesting, and new, oh, and also, they fucking did it. My touch will be most obvious in The Book of Secrets, or in Flavor Text on cards, which is my favorite task of all. But everybody did what they did best, and it's real, and it works.

Here's what The Dice Tower had to say:

And here's what Man vs Meeple had to say:

...but I can break it down for you. Somehow, and in accordance with the feeling I had, we put our heads together with Dire Wolf to make a persistent deck building game that tells a story around your actions and reacts to how you play. And when you're done, it's not over. There might be more still to find, on a board you can play forever. These videos pay the game compliments I won't even type here because it feels weird - I would feel like an asshole saying these things about my own game. All I'll say is that you can pre-order it, and if you do, it comes with a Pinny Arcade Pin and three extra cards.

I love Mike's cover. My job for most strips is incredibly easy, I literally just have fun with my friend for a little while and then he has to go browbeat millions of pixels into good behavior. I am more than pleased with the trade.