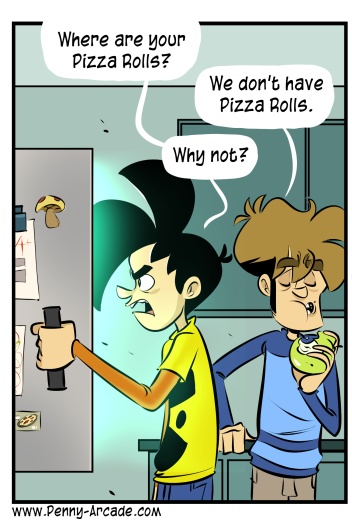 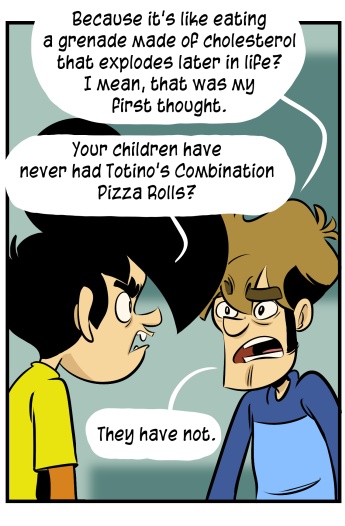 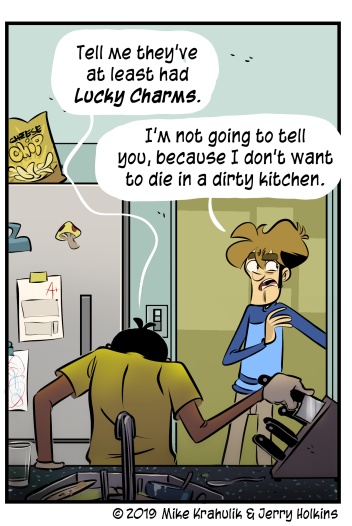 We were writing the strip he's gonna draw on stage this Sunday at PAX West, and he had mentioned Pizza Rolls in a meal context and not simply, like… as ballast, and I asked him if he still ate Pizza Rolls or if he was trying to delight me with some kind of ironical retro shit. He said yes - that he had Combination, which is more detail than I asked for and frankly more than I wanted.

When we lived together, the first thing he would do when he came home was preheat the oven. Then, after haunting the bathroom, he would come out and arrange frozen pizza rolls on a pan with more care than I think is technically required. Once made sufficiently auspicious, he would torment them inside the stove. I wonder if all this is because he was raised Catholic; he can't help but eat things off metal trays. What God has pizza for flesh? I am not much given to piety these days, but I could be tempted by a savory enough Lord.

I'm not, like, the best at being a dad. There are much better dads. But I think it's to my credit my unctuous grubs don't even know what a fucking pizza roll is. I asked them, and they said no. But now they wanted to know, which I suppose I should have seen coming. I told them they a Pizza Roll is a Tater-Tot made out of heart attacks.

But my children are drawn to danger. They shun the light.

I may have erred, here.