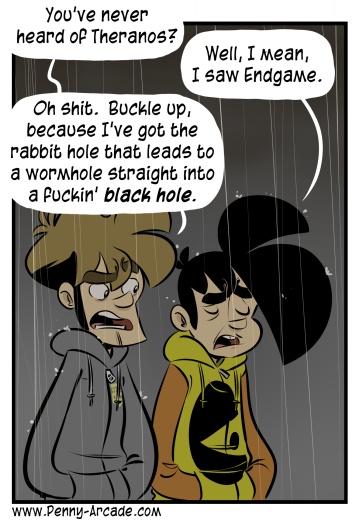 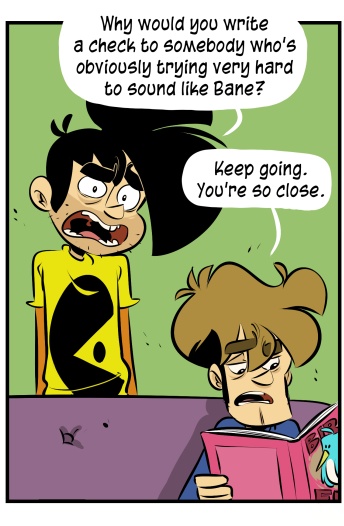 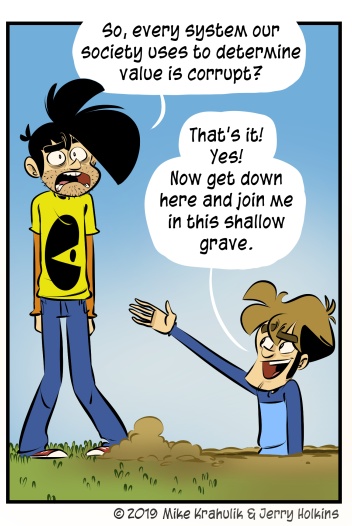 Because I spend so much time thinking about Theranos, I must have thought that Gabe did as well, even though that's not how thinking works and every moment of our union would have indicated otherwise. For my part, I think about it a lot.

He couldn't believe what he was watching, which is the correct response - to be utterly dumbfounded by it. I would say that Scientology and Theranos are two of my bugaboos, real molecules of fear, because in either case they are about people that have caused reality to bend around them. The ramifications of male thirst in this story really can't be understated; the desiccated liches who lent a patina of credibility to this fucking grift enabled the entire hollow affair to rob people well beyond the shelf life of this lie.

I find card magic really interesting, and my friend Ryan knows how to do it for some reason - I hit the bar to meet him late once after PAX South had wrapped, and he was performing a trick for somebody else. Because I saw the trick from the side, there was no "trick" at all. He was quite plainly holding the deck in two pieces - and upper and lower deck - so that he could deal a card from hidden places almost invisibly. When I walked around to the front, the illusion asserted itself. We're all coming at Theranos from the side, now, so it's easy. She's a comical figure, with an utterly manufactured persona that's plain from a hundred yards. The eyes are held too wide, like a kind of doll brought to terrible life. But the story was very good if you got it from the front, and such people - bullies - have a variety of tricks to keep you there. There's nothing about this I don't know. They adopt a customized identity for every scenario. Ask about something innocuous, something you have every right to, information about your own life, and get screamed at. They'll control who you talk to, compartmentalize the information so it's impossible to reconstruct a useful narrative. This happens, and happens, until one day you're a passenger in your own life. People like this are adept at choosing targets, it's a survival adaptation like a claw or a wing. Getting you to mute the klaxon in your head saying "This is fucked" over and over is one of their first, best tricks.

It's not until much later that you unpack these memories, lossy from compression and trauma, and you wonder why people didn't recognize what was happening. Didn't do something. You can hold on to that last bit for a while. I'm not sure it helps, because they were abused too, even if they weren't fully aware of it. They simply adopted the consensus, that is to say manufactured, truth. You have to understand: they were all seeing it from the front.

The two day collaboration with our friend Tony Touch starts tomorrow, and here are the times such delights will be on offer - the stream will be your mystic portal to a realm where a man sprays paint on the walls inside our office, but it's okay, because we said he could do it. It's nothing like the other time.

There's even a wearable version of the piece going on our wall for preorder! Please recall that the collaboration garb is only available until the 20th. Alright! See you tomorrow!