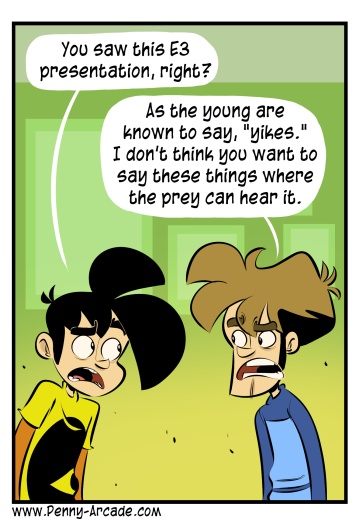 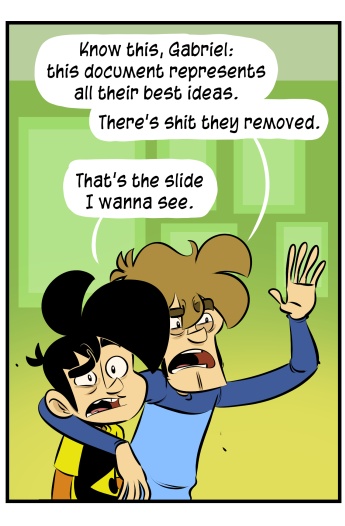 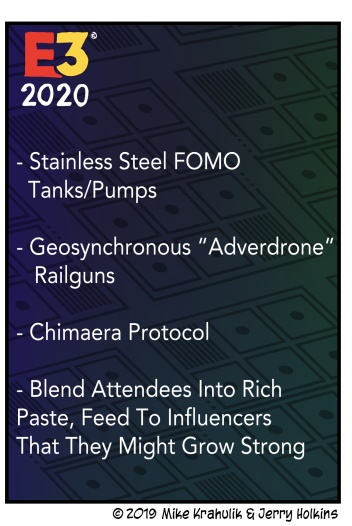 I did a search for E3 Leaks, to get something I could put in the post about their recently exposed presentation about the future of the event, but the article that came up first was about another, different leak. Generally speaking the "dunks" on this presentation refer to some of the language used, and that's the ground we cover in the strip. It's hilarious, but it also feels weird to read, which is why it's travelled so far. But the idea that they want to add life to the show by actively recognizing the texture of the moment we live in isn't wrong.

Whatever the concerns they might have, and the world is no doubt different from what it was when I was regularly attending the show, E3 is a legendary edifice. When something happens connected to the show, some bit of news, it seizes attention. But they have to be conscious of the danger they're in. They describe categories of people and recognize their necessity, recognize the crucial role they have to play in the evolution of the show, but they don't seem to understand them very well. They're going about this backwards.

Tattoo stream is running all afternoon - first up it's Gav, and then Gom Jabbar. I think I used the right commands so that this embed will mute automatically, but if not I'll keep spinning the tumbler in there to make it shut up.

Speaking of which, today is the last day to get a shirt based on our Tony Touch collaboration! I love this thing. I wonder if I have to preorder it also.