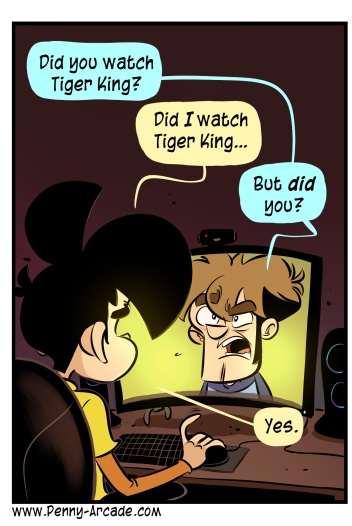 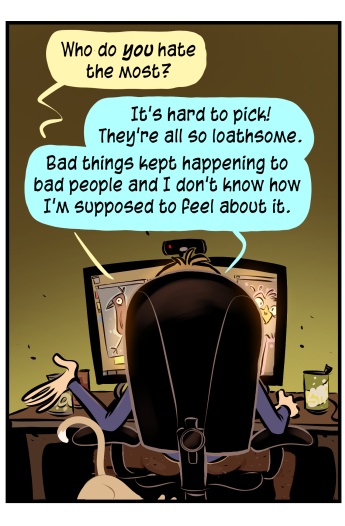 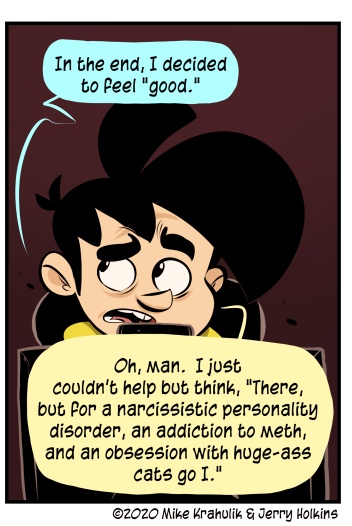 Love is Blind, I mean… there's a lot more going on there than it looks like. I expected the intellectual and chronological equivalent of Green Stuff, something whose whole purpose was not to be anything at all necessarily but merely to fill cracks in time, space, or cognition. Instead it's probably some kind of psychological experiment somebody should be in jail for. I stopped watching because it was torture seeing people lie to themselves about things they almost certainly understood. But I also stopped watching because I didn't want to be an accomplice. I don't want this to end up like some Stanford Prison Experiment shit, where somebody asks me in a room made largely from polished hardwoods why I sat there and watched the whole thing because that's gotta say something about me.

With fucking Tiger King, it's like… you watch an episode and you go, well, it probably can't get any fucking crazier than this! And then it gets crazier than that every episode and sometimes within a given episode. You disturb a spongy, rotting stump and a dozen fucking maladjusted psychopaths scurry out. It keeps being like, "Okay. We have our cast now. Everything will emerge from interactions of this set," but nope. I don't know what I thought it was about, because I'd seen it demanding my attention from the Netflix window, and I hadn't clicked because I had some sense that it was reconfiguration of something I could safely avoid. It's not what I thought it was about.

It's one thing for it to have happened, but then to have it collated with this kind of expertise - to have someone honor this skullfucked swamp of deceit and hand-crank it into Shakespeare on the back end. There's a reason to watch it, even if you think you're too smart to watch it. And what the fuck else are you gonna do?

Don't forget that tonight at 4pm PST our Twinch channel will roil with danger and excitement - a new episode of Acquisitions Incorporated: The "C" Team Approaches! With the aid of Josh, Dabe, and our technomancer Mike Buland, we've tried to rebuild the show into something we can do remotely. Sadly, Kris doesn't feel well - not that kind, fortunately - so we'll have to forge into this haunted-ass mine without him. But do reference him, absentmindedly, in your non-denominational well-wishing.