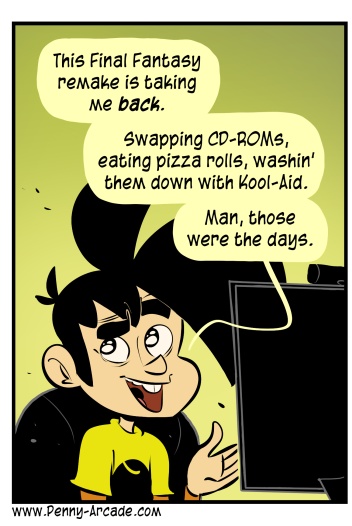 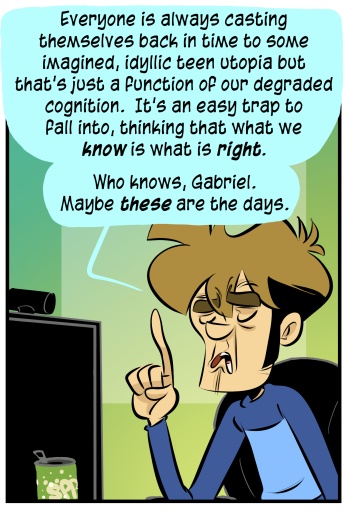 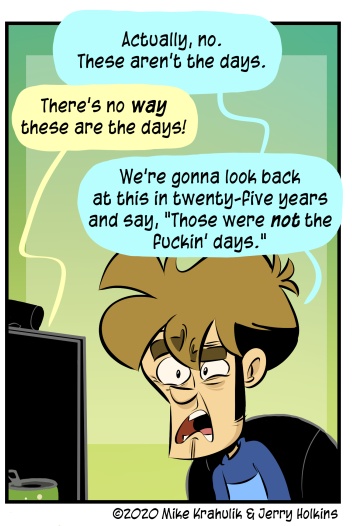 I haven't purchased Final Fantasy 7 Remake, and I'm not certain I will - I didn't really like the combat in the demo, though Gabriel has suggested there is a mode that might be more to my liking. Obviously it's some landmark shit or whatever but I'm happy to merely observe this spectacle. Really, if you think about it, that's where spectacles excel.

What I do feel is the nostalgia. And what I do taste is the Man-O-Mangoberry Kool-Aid we made with double sugar, a viscous agent, sufficient to strip the accreted oils of the Pizza Roll - the selfsame oils that made the changing of a disc so fraught with peril. We meditate on this and more in today's incomparable strip.

Valorant might be the most mercenary game I've ever played. I mean, we do need to consider the history here: League of Legends began life as a DotA it was possible for them to actually own. There was a thing out there, a community thing, an ambient force, an aerosol, but it needed to be captured, nominally differentiated, and Riot did that. I mean… I'm not talking out of school here, right? Everybody knows this. With Valorant, they're trying to do the same thing, but to Counter-Strike. Is that… possible? I would say they have turned an incredible amount of resources and attention toward answering that question.

It took about seven rounds before I got hooked into the rhythm, which is a CS rhythm. It's been awhile. The fact that some of a character's unique abilities need to be paid for - with the same money you use on guns - means they're tied into the economy like everything else. That works for all the reasons we already know it works, and it gives the experience an arc. This is all gonna get digested by the process I'm sure - I never really want for money, and I'm hardly carrying a team with my performance. I do wish I was up against it more.

After I debased myself via email in order to secure him a code, Gabriel realized Valorant is addressing Counter-Strike, and not Overwatch. "Hmm," he said, which I took to mean it was the last time he would ever run the executable. As I said, this is a fundamentally mercenary enterprise - but it's so polished you can see your face in it. Adding hero shooter dynamics to something with these stakes, as in the far more technical Rainbow Six: Siege, the result is more than the sum of its parts. Rounds become these strange puzzles with shifting dynamics, and there are enough rounds to crack this code and mount an authentic comeback. It would be my preference to simply resent it but it's too good.

I've never wanted a board game based on a videogame so bad as I have with Valorant. Well, maybe that's not true. I've harangued Supergiant about a Pyre tactical sports wargame for years with no perceivable effect. I don't mean I tweeted at them or something. I mean I said it to their faces - talk to Steamforged, they did Guild Ball. They'll murder this for you! Fuckin' nothing. Hero shooter shit is all over skirmish wargaming right now, and like with most Supergiant stuff, I really want some way to go back to the places they've made. But I also want to play wizard basketball very, very slowly.