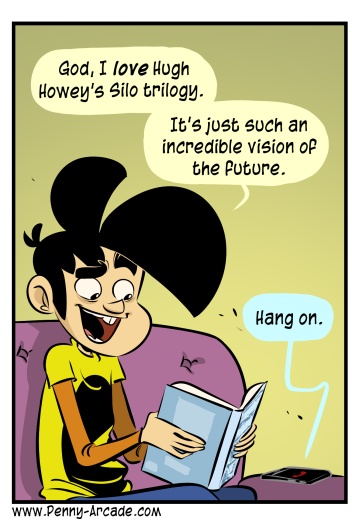 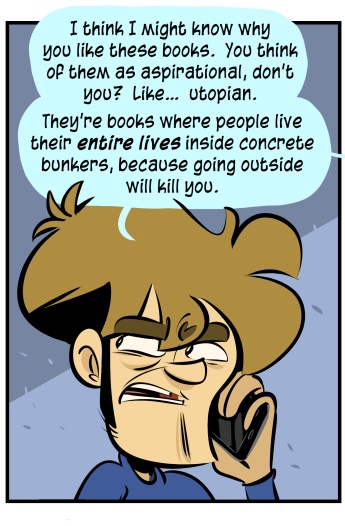 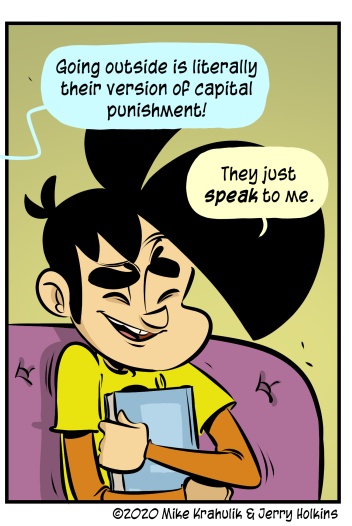 I need new books. I was reading a book Kate Welch/Rosie Beestinger/Yitzbin Attende handed over at PAX East called Children Of Time, which is fucking rad, and then I read the sequel "Children Of Ruin," which wasn't as good, but let me hang out in that world a little bit longer.

Maybe I gotta hit up this Wool shit.

When we were on Gary Whitta's Animal Talking Thing, Hugh Howie popped into the voice portion of the chat to say hi to Mike at Gary's request, and Mike was (I think the word is) chuffed, and now I sorta want to find out why Gabe holds the man in such high esteem. He wrote a book called Wool but he also wrote a book called Shift and a book called Dust that, taken as a single meshed entity, make up what's currently a trilogy people refer to as Silo. It has certain properties that I, as Gabriel's prophet, have clearly identified as being a huge draw for his demographic, of which he is the only member. I think a Fremen stillsuit would be a great comfort to him. At least, anywhere it didn't significantly chafe.

I would be surprised if there weren't at least one more comic this week about science fiction novels, very surprised indeed, because we just wrote one. And we might write another! We've gone mad. Who can say why?  I mean, this wouldn't be the only time in my life where books were the answer.