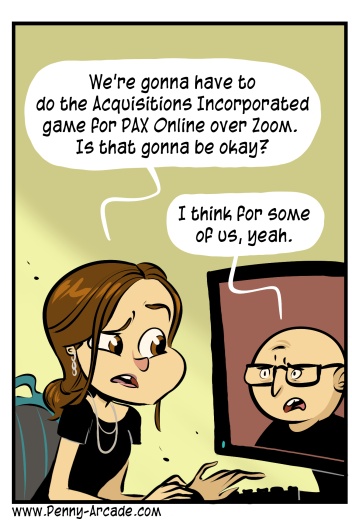 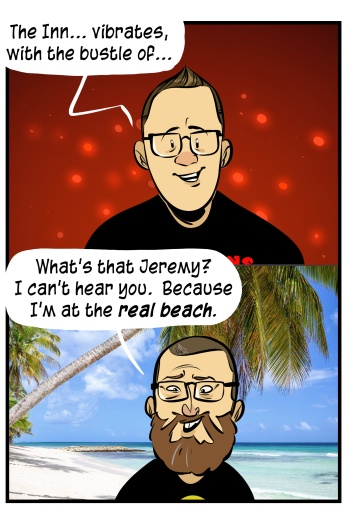 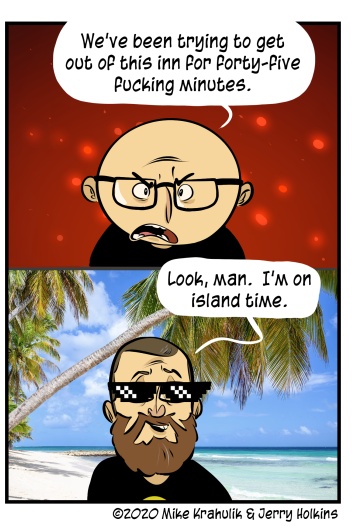 We haven't announced the full lineup for the Acquisitions incorporated game at PAX Online, but you can take this as an announcement that an announcement is coming shortly. Technically, this might be considered an announcement that there even is a game, so if you were wondering, you can now take that part of your brain and put it back to where it was - tending a gnawing, monstrous dread which only seems to grow as you observe it, until the dread and the bedrock of your identity are commingled and inextricable from one another.

But! Let me establish that Zoom Gabe is a real phenomenon and may even be (what I have heard described as) "a mood." This strip is essentially documentary footage.

We weren't sure how it was gonna go this afternoon for the Motorsport Manager stream, after Gabriel's Mouth War at the dentist. But! He says he feels okay, even if he won't be able to down king cans of Schilling "Excelsior" Imperial Hard Cider, which frankly might help us the fuck out.

But the celebrations don't end there - we'll also have a version of our new Gabir Motors branded overlay, a mere glimpse of which should return him to spritely health. Dabe - with a startling coding assist from none other than Gabriel the Younger, who has apparently used the pandemic better than all of us - has put together what could only be called a livery, a coherent visual narrative to contain the disparate racing streams that takes a variety of forms. One of these exquisite battleforms will be on tap for this afternoon and we're incredibly excited to see it in action. We'll be grabbing the stream from Dabe later this afternoon at 2pm PDT - he's in there now digging into the new Alan Wake, AWE shit that just dropped in Control.