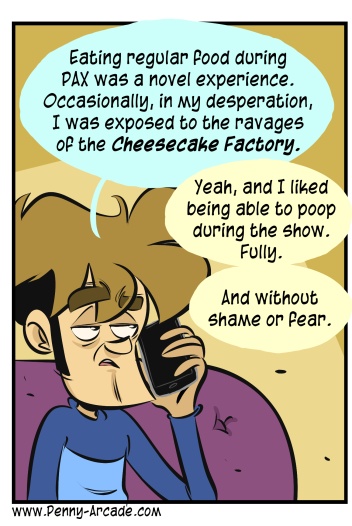 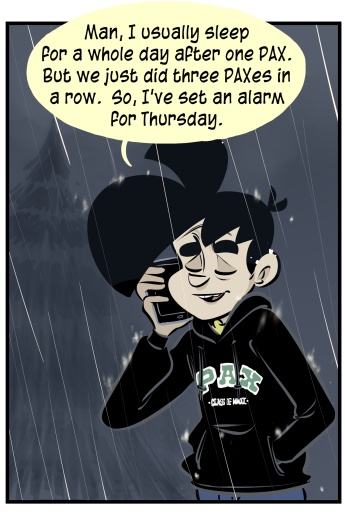 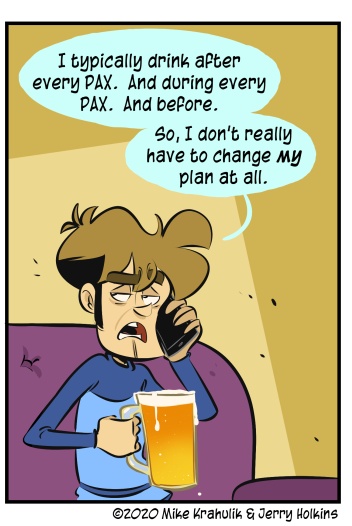 A lot of dinners I had to eat much later because of the schedule, I just had something going on then, I was being beamed to various places and because I was not corporeal at that time I could not eat. Gotta have a mouth for that. But I still ate more than I would have at a regular PAX, which is basically nothing but whatever nuts and seeds are being pulverized at the bottom of my backpack. I did go to the Cheesecake Factory once, yes, my mom was there, and I think that is the kind of place you go with your mom. What they brought me to eat was an aggressive, fried sculpture that defied the diner to contend with it. It was a kind of martial challenge delivered in the dialectic of lunch.

It had nearly a foot of Frizzled Onions atop an essentially invisible entree - it had the pomp and affected gaiety of a Melbourne Cup hat. But some evil prophecy has been bound into it, folded into its proteins, and as they were decompiled within my body it gave rise to visions of horror. I'm saying there is a scenario where literal no food is superior.

So, now that PAX Online has come to a close, we really have to investigate the idea that PAX doesn't even require a venue to function. PAX is essentially a kind of trust, or faith, that the people who attend it bring with them - all we can do is safeguard it. The teams that put this together thought about you first. That's why it works.

I'm here to tell you that as I hung around in the Discord after the last panels, much as I would haunt the front edge of the stage after a physical show, it felt exactly the same. And I felt jittery and wild afterward, without sure knowledge regarding what to do with my hands exactly. There was just a kind of vibration in them. Pockets were too tight. Out in the world, they felt exposed somehow.

Know this: with PAX Online in our Rear View, we can once again resume our campaign of golf violence against those known wastrels and braggarts, Gary Whitta and The Other, Somehow Lesser Will Smith. And I say this, all these mean things, because they're probably gonna fuck us up like they do a statistically significant amount of time. Here in the post is literally the only time I can get one over on these devils. Maybe today will be my day: at 1pm PDT, stop by the stream for what is probably the most legible streaming experience possible.

After that, at 2pm PDT, our engineer Mike Buland and I will be harvesting space rocks in Deep Rock Galactic which I was away from for a second but I just dipped a toe back in and it's incredible. See you then!