I don't know anything about GameDreamz or their magical sources, who may or may not be hamlet of loquacious munchkins. It's quite possible that they're just repeating what they heard, and aren't a bunch of fucking liars after all - I'm just sensitive about my Shenmue, I suppose. I'm not sure why, as it is a game where you must literally get a job, and learn not to spend all your money of toys and videogames. It produces a genuinely profound mental state, with its rows of ironies which hum like subterranean machinery. 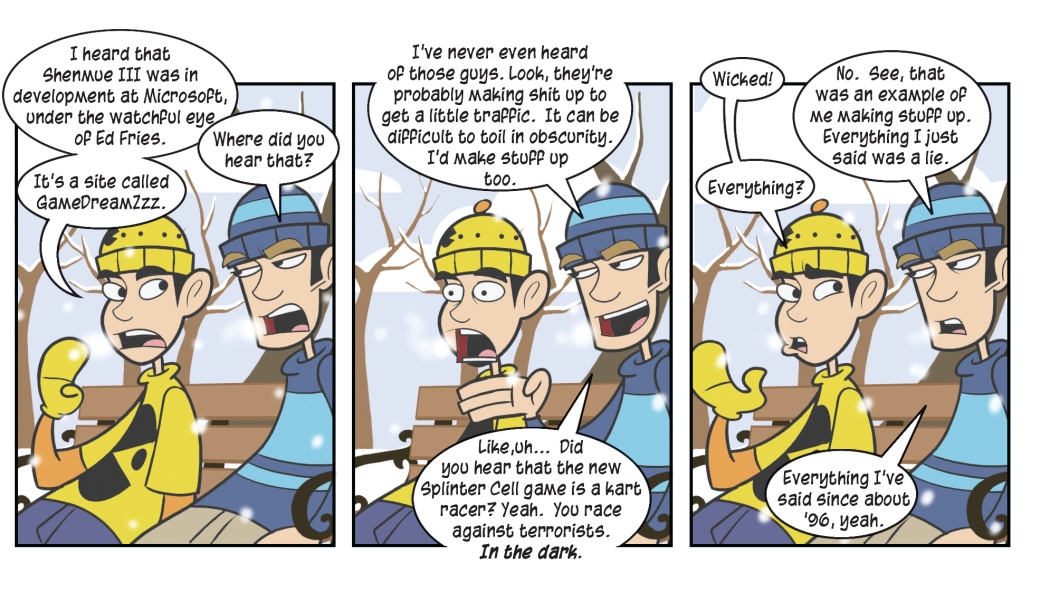 I attended the midnight showing of Return of the King, though I clearly have tickets for today's 4:45 as well. While Brenna enjoys the Rings films as much (and probably more) than I do, the midnight ritual so critical to my people is wholly alien to her way of thinking. On the other hand, the way that each of her friends has chosen a different member of the Fellowship to be their favorite so as not to overlap affections is somewhat mysterious to me, as well. It is as though we're dealing with a sort of Medieval Beatles, where each girl's romantic dreams can only exist in a world unsullied by the cruel mitigations exemplified by the Venn Diagram. There can be no sharing. Brenna's a Sam girl, Sarah's down with Frodo as I understand it, and of course Kate pines for Aragorn, son of Arathorn. He's into elves, I'm not sure how that's going to work out. At any rate, it would appear that Legolas is available. There may need to be some kind of Internet registry for fantasy hunks.

You may be wondering whether or not this is a good movie. You want to know if the hopes you have invested in it will be dashed, your good heart trampled as it was when you left Episode One - gasping at the naked contempt displayed by George Lucas.

I predict that you will be knocked clean on your ass, in the absence of mercy, pounded by raw craft and quality for the film's over three hour duration. I liked Two Towers well enough, preferred Fellowship, you know, but it'll do. It was better than jabbing your hand into a box of used medical sharps. Return of the King, by comparison, is every element executed with laser-guided precision. At one point, I covered my gaping mouth with the Hordes of the Underdark manual. Yes, I brought it. I'm sort of a big dork, maybe nobody told you.

I got home about four o' clock in the morning, made a pot of coffee, and started in on the post. I would not call my thoughts contiguous at this point - it may be time to go to sleep. One last thing, though.

There is a new batch of Child's Play pictures, four or so I think, which start at number 46. It shows the fancy new storage facility a little bit, it's something I could whip up a quick diagram of if people were interested. We have an extremely (read: not terribly) elaborate system to manage the influx, which required yet another truck and an eleven-hour day on Monday just to manage it. For a moment I thought we were seeing the beginnings of a lull, but then a hundred more boxes came at once. We sent Kinko's an image of a check for $27,406.18 that they're going to print out really big on some foamboard. We'll give the Children's Hospital a real check too, just in case their bank doesn't recognize pretend money.

my god, my tourniquet