I just can't get enough of those Infinium guys. It looks like the HardOCP thing has gone into Round Two, with HardOCP making some concessions which aren't really concessions and Infinium burning down an old folks' home. I mean, not burning one down. Now that the lawyers are out, perhaps it's best to be circumspect. One did burn down, though. Maybe they did it and maybe they didn't. 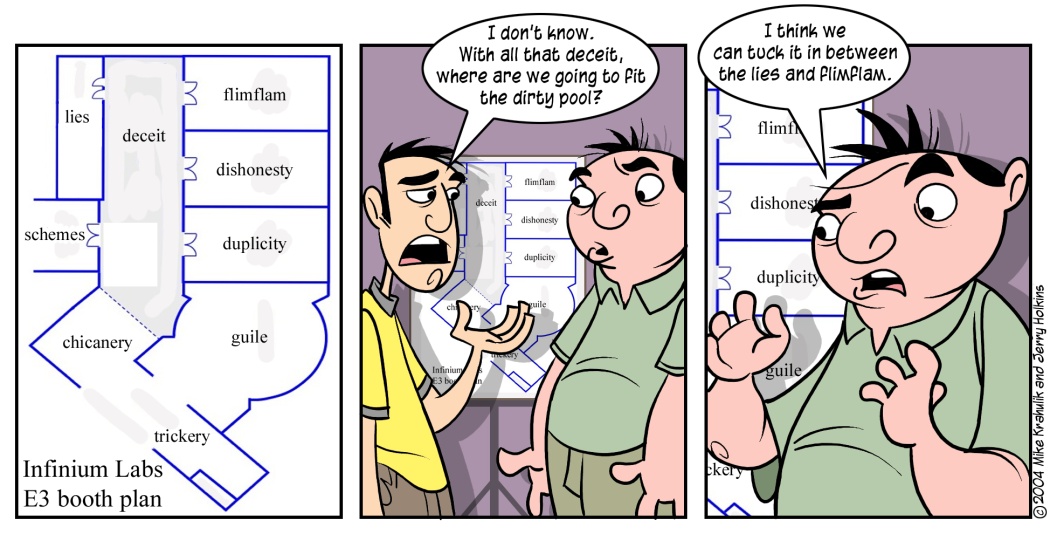 They keep offering to let us check that thing out - the Phantom, I mean - because I guess they have some offices right here in Seattle. We didn't take them up on it initially, just on principle, but now I really want to see this shit. I guess I could wait until E3, when their 8000 square foot earthly kingdom comes to rest, but now I can't think of any good reason not to. I mean, we're best friends, right?

The way that it works at Microsoft - or so I'm told by people internal to the company - is that at the highest levels, you have a dark fraternity of scaly horrors, who recline on thrones shaped entirely from blood frozen by mortal fear. Virtually every person who works there, in the caverns gnawed by the she-worm Arbalex, feels so guilty for working at Microsoft that they practically kill themselves to make the best products they can. So yes, while having a target to rival the glory days of Daily Radar does satiate, I am beginning to wonder if we have a similar conundrum. Perhaps the people at the top simply enunciate their aims poorly, and resort to the legal solution - what you might call "the nuclear option" - with too much haste. We received a letter from an employee local to us that didn't exactly know what to do, as he enjoyed Penny Arcade but worked for Infinium Labs. Initially I surmised that death was the only answer. Perhaps we should actually look upon the work of his hands before sentencing him.

I remember reading some kind of article yesterday about how there were no new games to play, but I'm typing this news post with the one hand that emerges from a huge pile of them. Yesterday we picked up Ninja Gaiden and Steel Battalion: Line Of Contact, and in slavering anticipation of the morsel I purchased the strategy guide - yes, the strategy guide - for PSO 3: Card Revolution. Not sure what happened there. Ninja Gaiden has been pretty great so far, I'll probably talk more about it in the next couple posts, but yesterday was largely given over to Steel Battalion.

Steel Battalion: Line Of Contact, when you think about it, actually costs two hundred and fifty dollars plus Live charges to play. We didn't pay that, you understand - other than the fifty dollars we'd pay to get any other game, we traded in tons of shit to make sense of that purchase. No matter how you acquire the technology, however, playing it one does have the sense that they are engaged in a truly decadent act, like riding in an opulent litter out to the mailbox. Gamewise, it's the sort of thing you need to own in order to make your initial purchase even the slightest bit sensible. You might be startled to find, as I was, that there isn't a lick of single player content. For what amounts to an online-only expansion pack, I'm of the opinion their price point is a bit greedy - but I doubt it kept them up at night. Think of the first Steel Battalion as them having sold a set of limited edition, solid platinum scepters - odds are good they can charge whatever they want for the decorative, topaz encrusted pommel.

The experience of playing the game is, to my mind, very interesting. A clan could take this game very seriously, with its tradable insignias, tradable replays, voice support and an online campaign mode. Riding towards conflict with your teammates, your VT locked in fifth gear as you skim across the desert is tangibly unlike other game experiences. On the radio with your compatriots as you initiate your elaborate startup sequence, one does get the impression that something important is about to happen. Whether or not that important thing ever actually occurs depends largely on whether or not you liked the first Steel Battalion. The pace of combat is much more deliberate that many mech games, and it can be difficult to ascertain just how much fun two hundred and fifty dollars is supposed to be worth. That's why I recommend, as I did initially, that you do as we did - buy it with friends, heavily subsidized by old games you no longer play - so that price issue doesn't linger. You can negotiate visitation rights with your people and enjoy the device as a crew, as we've determined the best way to play it is to have someone around to appreciate the awesome shit that you just did.

There are some networking issues that keep you from joining many games, so even though we found many more games out there than I would have expected we were kicked from the large percentage of them. I'm hoping that this is something they can resolve. Purchasing a game of this dollar amount, even if I didn't spend a whole lot of actual dollars, and then having it not function properly is something like buying a Dodge Viper at full price and then discovering that it's made out of paper mache.

you're only going to walk all over me