Even those who are not big into table gaming have often heard of Settlers of Catan. With over twelve million copies of the game sold worldwide, it's often used by crafty tabletop proponents to lure non-gamers with its colorful tiles and straightforward, intensely social systems.  The digital version, developed by staunch devotees over at Big Huge Games and delivered via Live Marketplace, is a deeply reverent execution of the original. 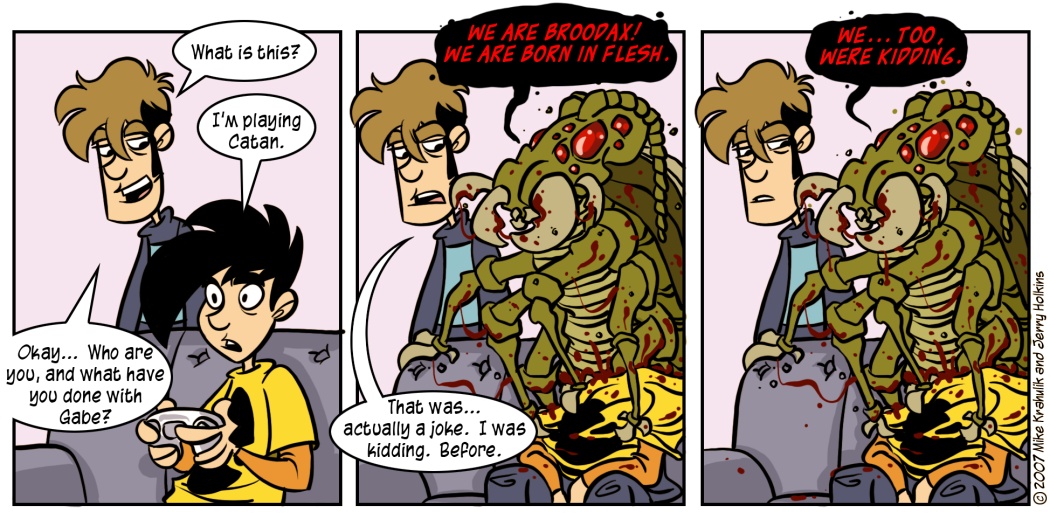 As detailed - um, loosely detailed - in the strip, every molecule of this game would need to be altered in order for Gabriel to like it. In the Gabriel version, players would move bits of red licorice around a sizzling porterhouse, waiting for their chance to trade caramel for boobs. The game (at least, as traditionally constructed) is not played on meat.

It's a game that seems complex until you bring one to completion. I understand that there in turn three you might be trying to understand "what is so great about docks" and "what is the deal with wheat." Once you see the full arc of Catan, trust me - it will seem obvious. Catan is a game about securing and trading resources. I know you are looking at your cards in desperation. There is a sheep there, and he chews with derision. Do not be intimidated.  He's a sheep, what the fuck does he know.

There's no demo for the game out now, there was something wrong with it I guess, but if any game ever needed a demo this is the one. I'm usually pretty confident in my recommendations, and I feel very secure in this case, but you deserve a chance to learn it first. I don't want you to be out ten bucks because I'm some tangle-maned, street corner preacher guy who wants to convert you to my boardgame religion.

I didn't have any problems getting a game together and then playing it, but it was exclusively by appointment play. Because servers are made to host only three or four players, their availability is a quantum event - they bloom and recede in a moment. Robert and Gabriel ran into this when they were seriously into Pandora Tomorrow, another game with a very low cap - it's somewhere between a technical problem and a social one, and I don't know the solution.

I've long coveted the exquisite Collector's Edition of the actual boardgame, coming as it does in a wooden fucking chest. If you go to options, you can change the skin to something that looks that way in-game. It obscures some data, but this data is quickly available on the triggers so for me it was an easy choice. The basic board looks exactly as the hexes would on an actual table - rendered in high definition, they are almost breathtaking in their simplicity.

I don't know how this happened, how a game of this type was authorized all the way up the chain and then delivered on a mainstream entertainment device, but it's clearly the result of some divine act.  I must remember to make the proper sacrifices.

she'll be driving in a hearse