This has been simmering on some tertiary heat source for awhile, and it may be time to serve it. When a classic game is re-released for digital delivery, by what criteria are they being reviewed? 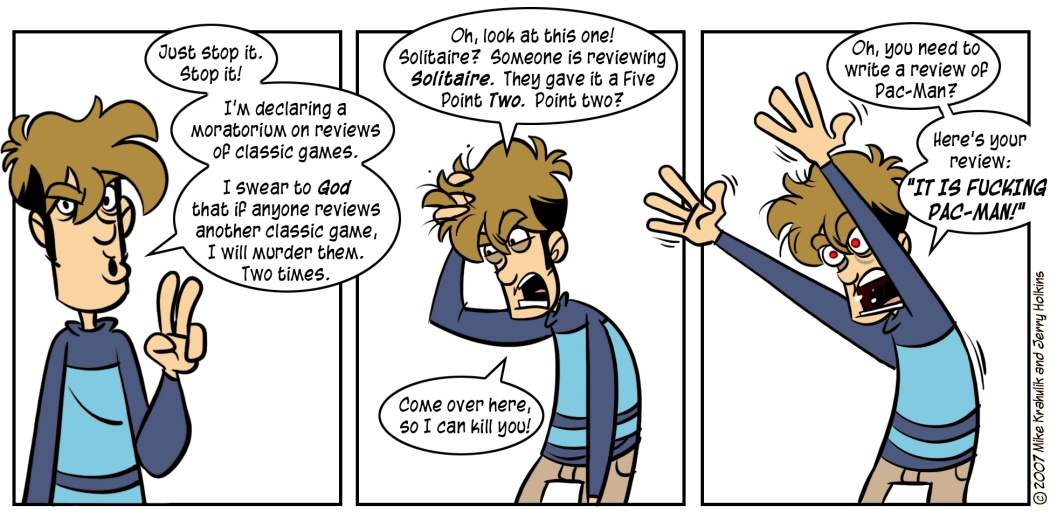 The reality, of course, is that in order to maintain healthy relationships with publishers you need to review their product - great, and small. This no-doubt includes "channels" like Xbox Live Arcade, which must be where these workaday, worthless reviews come from. In some cases there's simply no need (beyond the business realities alluded to earlier) for young men to toil in describing them, because these games are so elemental: they have two buttons, and one mode of movement. What is it? It is Xevious. End of review. The word even sounds like an adjective.

These games are cheap, cheap, cheap, but ironically something that costs ten dollars and has a Goddamned demo is scrutinized more in terms of value. Is it Xevious? How much more Xevious should it have been to rise to the ten dollar level? Could, perhaps, the enemies enter the screen more Xeviously? The game appears to lose points in graphics and sound simply for being old.

It isn't impossible to discuss fundamental games in a way that is interesting and valuable. But I don't know if plugging ancient games into the Hardcore Review Machine and outputting your stupid little number improves the world.

None of this applies to Pac-Man Championship Edition, which only looks like classic Pac-Man if you aren't paying attention. I've heard it called a true Pac-Man Sequel, and that's valid, though there were many, many Pac-Man sequels, in addition to the cartoons, shirts, shoes, cereals, beverages, and other products. Did you ever play Pac-Mania, or Baby Pac-Man - an intimidating arcade gryphon, whose top was a classic arcade machine while its lower half was a half-size pinball table? I'm certain that this strange device paces the halls in some electronics museum, sniffing the air for prey.

If Pac-Man CE remains on Live Arcade only it will be a criminal act, and I will work to bring these evil men to justice. I downloaded the demo expecting disposable content, consistent with the necrophilia on display elsewhere in the classic coin-op section. After one round, this demo I grabbed explicitly to revile had become a sale, and a week later it is an obsession and perhaps even a lifestyle.

It's in Widescreen, and it has a slick look, but what it really does is segment the maze into two distinct "boards." In strategy games, you often play through classical scenarios, and this has a similar feel: each side of the map can have its own maze, and its own arrangement of dots to consume. It may be full of dots, or dots may be sparse. There may be no "Power Pills" to drive back ravening spectres. Every time you complete a side, the classic fruit appears which can both replenish it and radically alter the maze. If you are caught, there is a slight pause before you return in the same location, so the game never really stops. Each mode is time limited, which I've heard complaints about - it would be nice to have an option to play perpetually, to play forever if possible - to play until the Earth is a lifeless ball of ice. I don't mind it. It just emphasizes a different style of play, reinforcing the already manic drama of hunger and pursuit.

It's absolutely critical that you grab the demo, at the very least. You'll be surprised by its vitality and relevance.