With the tiller once again in our sure grip, we have charted a course toward... jpegs. 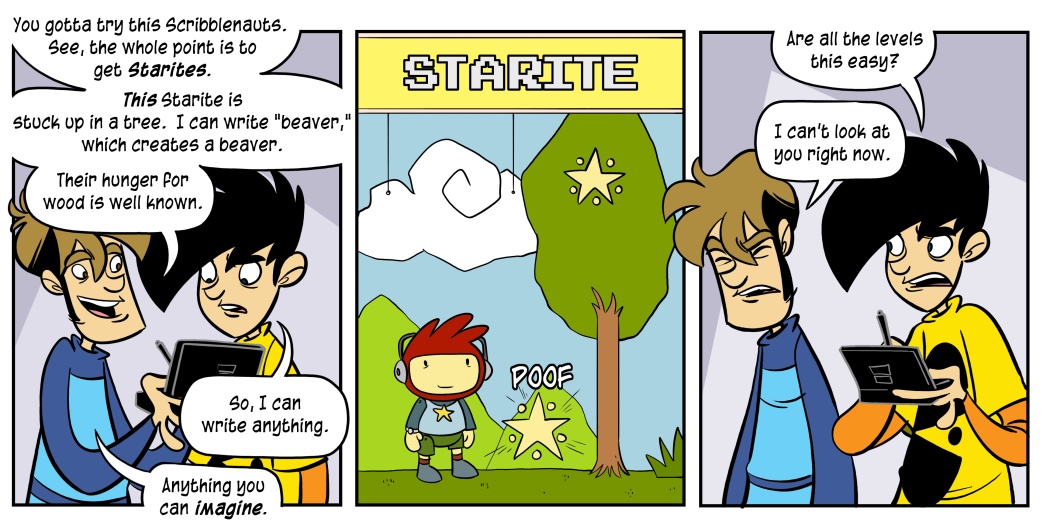 I started with a strong nautical metaphor, but then I couldn't make it pay out - and I apologize for that. Scribblenauts is a fun thing to own, though, even if playing it is sometimes a chore because of fiddly, ambiguous character movement or occasionally strange behavior of your summoned items.  Everyone seems to play it differently, and everyone can, which is to 5th Cell's credit.

I was playing Battlefield 1943 a few days ago, before ODST took root - not really playing it, so much as using it as a venue for conversation with a friend of mine. I started to list off the games I was planning on picking up in the next new months, and that list was useful to him, and I wondered if it might be useful to you as well. You'll note the caveats afterward. Pedigree means that I have affection for the developer itself, or a previous product. Multi means that playing the game in multiplayer mode is a primary reason for purchase. Bet means that I want to like it, and that overrides elements that might be a concern for rational people.

Those are the solid, one hundred percent, "going to buy it" games. You'll note that every one of them has a pedigree element, which makes me sad. Newly hatched time constraints have made me more conservative than I want to be. The Suffix to that list includes games like Alpha Protocol, Split Second, the new Operation Flashpoint, and weirdo crap like Magna Carta - games that under normal circumstances I'd buy without hesitation, and get to when I could. It's a resource thing. I can't make my life come up even sometimes.

So many of the games I'm obsessed with ended up being the ones that travelled from 2009 to 2010, or were already natives of that inconceivable Far Realm - personal fixations like Splinter Cell: Conviction, Blur, Mass Effect, Infinite Space, Bayonetta, Bioshock 2, Brink, and Heavy Rain. Given the size of my list already, and its diseased appendix, this is an incredible relief. It has long been the policy of this site to decry the toxic annual algae bloom that makes being a devoted enthusiast of this medium virtually impossible.