When I was tooling around the ‘Con a couple weeks ago, I managed to scam my way into a BioWare thingy where (much to my surprise) six massive Shepards stood vigil. The female Shepard that is, colloquially referred to as FemShep. It was all part of a contest designed to play up the distaff side of the equation, chosen by just under a fifth of the playerbase. You could go online and choose which one would be the default. Employees of the company were very excited about it, and all had their favorites; none of the ones I spoke to would have chosen the Shepard now known ignominiously as Shepard 5. 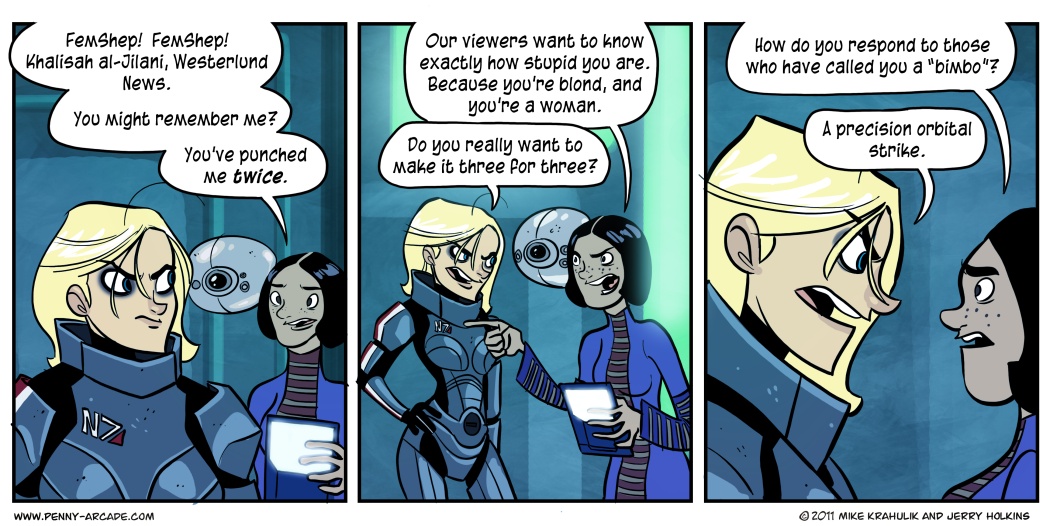 It’s one of these online shitstorms in certain quarters now, people don’t like how it shook out, or who might have shaken it out. That’s the trouble with democracy, huh? The wrong people are always voting.

The idea that this tousled, interstellar bad-ass with a sidearm, an assault rifle, and some kind of hard-light holoblade represents some form of wilting star princess is beyond comprehension. This is the same Shepherd, Commander Shepard, whose exploits have cut this way and that across an entire galaxy; the one who parleyed with Reavers, and released the Rachni. The one who died and was reborn, the one who laid low a writhing and larval world-eater.

She is that Shepard, even though she may not be your Shepard, just like she isn’t mine; I have every intention of Reconstructing the Profile. I didn’t vote, which is to say I didn’t “Like” my “favorite,” because I don’t book face. My own Commander Shepard is based more or less on my wife Brenna. I wanted to make a far-flung, up-armored version of my daughter Ronia next time around, but then I remember that you have sex with tons of aliens in this game, and that seemed like a weird thing to be doing with her body. Are we still allowed to hope that our daughters settle down with a nice human, irrespective of gender, even though it forecloses the possibility of couplings with sentient minerals or bepedal reptoids? I hope this is something a father is still allowed to do.

When it comes to sci-fi heroines, it’s sort of hard to beat Lieutenant Ellen Ripley - but she’s got good company. Starbuck comes to mind, but in the game context Samus Aran will always rule the roost. Not the new codependent weirdo Samus, I mean the old hard-ass who deigns to remove her helmet when and only when she has obliterated every lifeform on the crust of that world. She also has a symmetrical body and blond hair, which is unfortunate - she might otherwise have been valid, interesting, or powerful.

It’s genuinely bizarre what people are trying to get away with here. They’ve rendered the shopworn “blond joke” with post-modern foofaraw, and finished it with an organic Açai reduction. It’s ridiculous. I wasn’t aware this was something we still tolerated? I always forget which people we may stereotype safely; it’s entirely possible I missed the latest communique.