Running a total of four strips, Nightlight: All Through The House is a four strip Nightlight story about, you know. Things that permeate houses, I guess! You'll know when you see it. 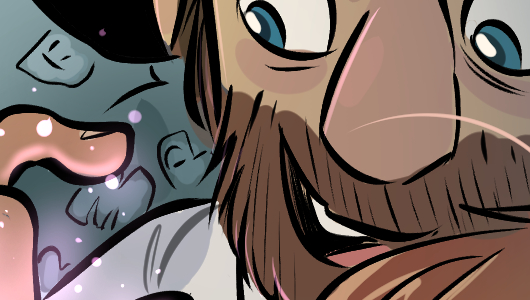 The 3DS is back in rotation hard with Pokemon Picross, which is like a Picross game where you make pictures of Pokemon which you also then collect. It would be nefarious even if it weren't free to play.

For some reason, many of the people I talk to at a given PAX don't seem to know about Picross. This sucks, not just because their lives haven't been enriched by Picross, but also because I have some metaphors I'm fond of that require a working knowledge of the game. It's supremely inconvenient to lead with a penetrating Picross themed insight and then have it just glisten there on the epidermis, wholly unabsorbed. It's not clear to me how one of the best puzzle forms has somehow eluded universal worship. It's like Sudoku, but fun and cool. And when you're done, there's a little picture, instead of a bunch of numbers. I'm sure that Robert appreciates a big pile of numbers but if I had to choose between Charmander and some numbers I'mma go with the Lizard Pokemon.

So, if you don't know about Picross, their digital store has loads of it. If you aren't down with free to play, which we'll come back to later, grab one of the ones in the Picross E series for six bucks straight up and sink down into this inviting brain syrup. It's like, um… Sudoku Minesweeper. The game offers you a grid with a series of numeric clues alongside each row and column, so if you have a ten by ten grid and the clue is "9," you know that the middle eight squares are filled in. Then you use the crumbs of information you have to infer greater and greater relationships. There can also be more than one number in the clue - something like "1 8 1," which means that there is one filled in block, followed by eight filled in blocks, followed by one block - each discrete entry separated from the others by at least one blank. Those blanks are just as important as the filled in squares when it comes to the "greater inferences" I mentioned before. The feeling of it - the brain feeling - is exquisite, because you can actually sense the crystals of awareness forming and spreading out. If you want to feel like Sherlock Fucking Holmes every ten minutes or so this is a game you should have.

How much you can play is mostly governed by a resource called Picrites, because of course they are. Right? Every one of these things has to cook up some clever name for its whippin' switch.

The amount of Picrites you get as a matter of course probably won't support binge playing of the game. I have time, or I don't have it; as much as I don't like what feels manipulative about the genre, my life is a pretty good fit for free to play. Unless I really, really love a game, I never bump up against the energy or currency limitations. I'm about to bump up against them here, but… it's possible to pay for an essentially unlimited volume of their currency for about thirty bucks. You aren't supposed to let people buy their way out of the trap, it's a complete F2P no-no, but they let you do it. Nintendo's approach to F2P - which they call Free To Start - has a shareware vibe to me, so long as you can still Get Out Of Jail at a certain price.

I just grabbed SteamWorld Heist, too - a turn-based strategy game, rendered from the side - and it's fucking shit hot. It'll be nice to have it with me in Spokane, of course; something to do while I'm in line for our holiday ration of Hate Grubs.