I told him this for real, as a joke, and he seemed to think it was really funny. Also, I felt like there should be a band named Star-Elk. And I know exactly who else is in this band. I can see the logo, too. It's got to be one of those inexplicably rendered things that only members of the band can read. Or, maybe something more like the indomitable paraph of Queen Elizabeth I. It could go a couple ways. I'm open to interpretations of this imaginary band founded by imaginary teenagers. 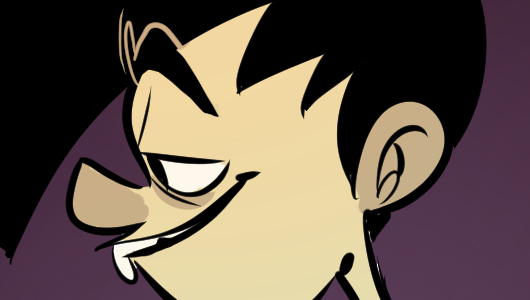 I backed a game called "That Dragon, Cancer" a while ago, I don't even remember how long ago. A long time. I wrote about it even longer ago than that. Some of what I wrote about my dad ended up in there. I don't know where a hundred percent, just that this thing is a kind of reliquary, not only for the family the game is about but for a lot of other people also.

If we can say, as we do, that Ninja Gaiden is a very difficult game, we must be able to say the same thing about That Dragon, Cancer, except it isn't hard for your fingers to do - it's hard for your actual self to do. It comes out tomorrow, and I was looking over some art from the game on Steam, and it made me nauseous. I dread playing it. I keep coming back to this paragraph, with the intention of changing the last two sentences if needs be, but it's still true.

Actually, thinking about it, I'm pretty sure "game" is entirely the wrong word for this. Sometimes the conversation about what is and what isn't a game has an element of rancor, where people are either trying to apply or deny the term based on the word's inherent sanction or imprimatur. This isn't like that, though; I wouldn't apply the term because I think they've made something else, and we just don't have granular linguistic tools to describe it.

We'll have a word better than "simulation" someday to describe what it is to bottle an experience as this family has, and then to bravely let other people inhabit it. They've modeled an incredibly complex human experience, and along with the physicality of it, they have modeled the emotional reality of it also, so it is a single piece. And I think that you can react to it, and you will; but at root, it's theirs. Tread light.