We left Tycho out of the strip on Wednesdsay so he could continue to suffer at the hands of the not-men who serve Ursus Malus, who is called The Eternal Bear. I'm pretty sure this is our last excursion into this place, but you never know with these fuckin' bear cults. 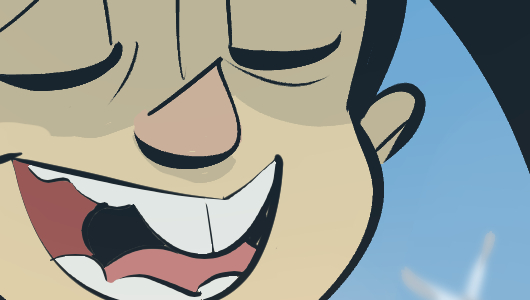 Gabrillio mentioned playing Ascension VR in his Gen Con post, and I had a chance to do just that myself with Theresa Duringer from Temple Gates yesterday. Talking to her about boardgames and VR was sort of like talking to the biblical Burning Bush. It was just… energy, that True Believer energy that I have and recognize instinctively in others. I'm keeping my eye on this crew.

Sometimes what happens with these Virtumal Relmz is that people try to "port" a bunch of regular game shit in there and it no worky. It makes you sick, or it feels wrong. Vestibular systems don't like it. Beyond that, you can get stuck on realspace metaphors for things in a virtual place. It has to feel correct, but it doesn't have to be literal, which is what Job Simulator does so well.

If I were going to make Ascension VR, and thank God I didn't, it would not be good. I'll tell you precisely how I would have approached it: I would have done some kind of Inn, and there'd be a table or something, and then you'd play Ascension. And it would be terrible. You'd be looking down at the table, but everything would be at kind of an angle. Lots of reading is hard in VR anyway, and you would shake a virtual fist at the cyberheavens and weep a digital tear.

The table metaphor actually works very well for Defense Grid in VR - it's not that tables are bad, it's that you don't need to read anything, and the towers stand up - they project up through the grid, into the game. But what Temple Gates did is turn Ascension into a forest-bound sorcerous duel, where the cards are suspended in front of the player because that's what is right. You can see your opponent back through the floating cards, their motions and lip-syncing mapped to the actual player, and that's how you play Ascension in VR.

I know people who won't commit to multiplayer on VR yet, just as a matter of Install Base, but Temple Gates has decided instead just to make a single product that lives on all available headsets - so if you have Gear VR on your phone, an Oculus Rift, or the Vive, each of those communities can play with each other to maximize the surface area of the game. The power of boardgames to be a social space is clearly top of mind, and they don't want to wait for the right time. They want to make it the right time by defining spaces for people to commune in this frontier. Like I said, right? Energy.