We wanted to try approaching Moss a second time with a strip; this is what we came up with for Round 2. 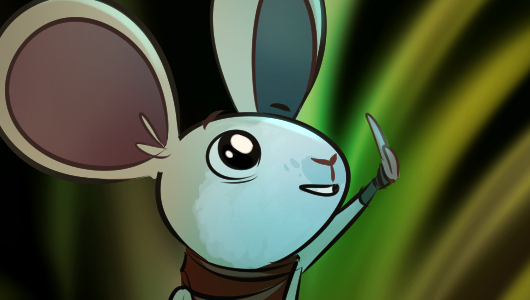 I would one hundred percent play it, except my unrelenting hellhound Mr. Bennet chewed through a bunch of the cables to the PSVR when he was a puppy so the whole thing is, in a phrase an elderly woman from Texas once taught me, a "GDCF." I mentioned this online, and then a PSVR kit arrived at the office. This is a very, very nice gift and is almost certainly a fraction of a fraction of a percentage of the marketing budget; it my not even be a "gift" in the classic sense and might actually be a something like an armed social media cluster munition. This said, I'm going to replace the equipment on my own and give this one away on Twitter. I'll even throw in a code for Moss so you can play it when your kit arrives. If I come to it, and love it, I want to know exactly why; sometimes a gift becomes a geas, and if they have triumphed, they deserve to have that from me without reservation.

A friend asked me what I was playing these days, and while I could list a few and I like them none of them is particularly dominant. I think Into The Breach is quite good, especially once you get enough coins to buy a few mechs and customize your squad. I'm fond of saying that it's a puzzle game that looks like a tactics game, wears its trappings, but the more I think about it I can't meaningfully distinguish between puzzle and tactics games - at least, in terms of how I play them personally. So, the distinction may be meaningless to you, or, if you're a fan of either genre you might really enjoy this hot roguelike puzzle tactics paella. I think Deep Rock Galactic is fucking going places and I think I'm overdue for a case of the R6: Sieges.

You get in the holding pattern, waiting for your next obsession; indeed, the actual obsession was so close that I couldn't even see that it was there. If you want to know what I'm playing, where my time is going, it's going into Dungeons & Fucking Dragons. I had to think about it for a very long time to even recognize it. Making and running Acquisitions Incorporated: The "C" Team forms the delicious girders that make up my life.