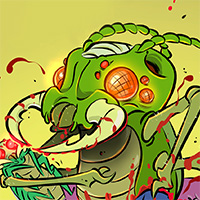 Hey there! Another PAX looms and we've been hard at work creating a colorful array of products for you. We'll have two locations again. Merch Main will be in its usual spot in the Atrium Lobby. And Merch Lite will have a new, browsable format in the secret caves accessed via the Sheraton lobby. We'll have signs. And probably a line. Come see us.

PAX South saw the debut of our Exclusives banner. And there is indeed one for this show as well.

The highlight here is of course that bright blue hoodie. But don't sleep on that Limited Edition pin which will be available exclusively at the Merch Lite booth in the Sheraton lobby.

This show marks the debut of our New Stuff banner. We made so many new shirts in anticipation of this show that we had to create a banner just to show them all to you. You'll see that sweet hoodie again, but also a veritable rainbow of shirt offerings that will all be at the Merch Main booth.

Let's review. Merch Main. Atrium Lobby in the Convention Center. It will have everything except Limited Edition Polygon Pins.

Merch Lite is in the Sheraton Lobby. It's got all of the PAX Exclusives including that LE Polygon Pin.

Both booths will have the full sweep of alluring Merch Rewards including that Merch Pin at the top tier.

I'm really excited for this show, in part because I'm eager to get myself into one of the To Reddit tees. Hopefully I'll see you there. Come say hi!