Here's the strip we did for Wednesday's Make-A-Strip panel, concerning Gabriel's legitimately weird gambling prowess. It seems like you couldn't really have gambling "prowess." It seems like a game with a very specific outcome and what he does in these places shouldn't be happening. If he gets anywhere near a computer, the machine ceases to be a computer at all; but when he gets near a table, pit bosses start to sweat from their necks and they don't know why. I used to think I was good at Blackjack, but after this year's devastating financial excavation, I realize that I'm only good at it when operating in his probability shredding nimbus. 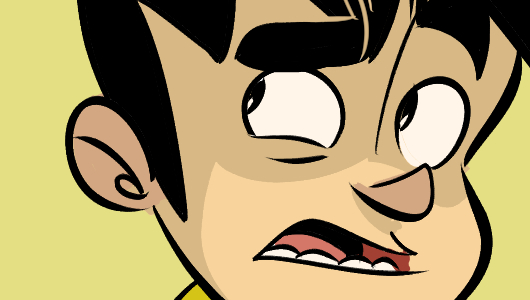 PAX Aus, like Jesus Christ, started in a barn. Even in a venue primarily concerned with livestock, the feeling of PAX was still there somehow and I don't understand it. I will occasionally try to apologize for or denigrate the humble beginnings of the show in Melbourne, spoken as the sorcerous Mael-Byn, but they're not having it. That's their show, and it's where the rest of this started. Point taken.

So, it's always felt good. But this year didn't feel "good" - it felt real. As in, this is PAX Australia. It is both PAX and it is Australian. I couldn't walk five feet without becoming physically encased in a crowd that wanted nothing more than to thank me for bringing it here. And it's like, thank you. Absolutely. My momma raised me right, I'm not going to turn down a compliment. But here's the truth: we rented a building, yes. We brought our peculiar expertise to it. The Enforcers are the mortar of the show, joining every seam. But the show was always here; that's something you brought in the door. I just started laughing when it was all done, yesterday. I couldn't believe any of the previous three days were real. I felt like there were sparrows in my ribcage; I could not parse the joy. So thank you.

Things were a little rough for the final round of the Omegathon at first, because Wizard Games was rad enough to get us a fresh build, and then in the mad rush to get the boxes set up and get our competitors acquainted with the Vive, the two machines were on different versions. Gabe had to softshoe a little bit while we checked cables and and discovered the error - but when we got it done? Well, then we had Cowbots and Aliens - a virtual saloon shootout that should hit Early Access today.

Alongside everything else that was incredible about this final round, it also produced the definitive photos of Kiko's career. Get a load of this shit, people. Here are your warriors: Banner Fall is the one standing up, and Arknym is the one crouched behind some imaginary barrels.

I've played it too, of course - "research" - but I never got to the heights of prediction, skulking, and tactics they got to by the end of the very first game. They took it to three rounds, and ultimately Banner Fall was able to take the crown, after discovering that having a sawed-off shotgun in each hand (a.k.a. The Reaper Technique) is a pretty effective way to go about things. But it was close, close, close, and I have every faith I'll be seeing Arknym on stage again. Runners-Up have definitely gone on to win. But even beyond that, PAX Aus is a place where the impossible is commonplace and potential is in ready supply.