We posit an artifact in today's strip, one of great power for the writer. 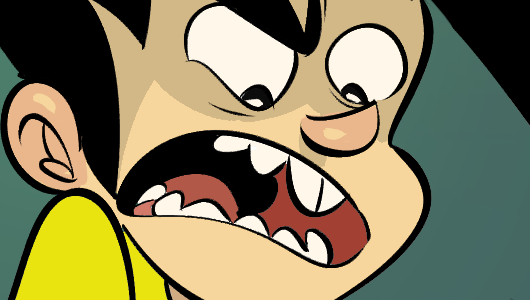 Because I am who I am, of course I know the rest of the sides on the Writer's Dice. One dice goes: Fish, Bird, Wizard, Robot, Dragon, and Bug, while the other one goes Guys, Ladies, Kids, Lizards, Ghosts, and Plants. It was mostly nonsense, like the lion's share of what we get up to, but now that I think about it these devices are surprisingly robust. For example, it's hard not to think that James Patterson's Maximum Ride might have been generated by a roll of the dice generating the value Bird Kids. Wizard Kids, we know what that is. Robot Guys might be too broad. I can't think of a specific example at the moment, but Wizard Lizards is incredibly fun to say.

I briefly considered that an Aurak Draconian might be a Wizard Lizard, but I think that's technically more of a Dragon Wizard. This is a configuration beyond the power of these cubes to muster, because "Dragon" and "Wizard" are printed on the same die. In this shit-ass universe, one we are perpetually determined to make worse, only a single face of a cube is on top at any given time.

It wasn't my intention initially, as my motives are - as always - incredibly pure and miles beyond reproach. As I type this with my right hand, my left hand is performing surgery on a barn swallow. Just, like, gratis. It's something I'm doing because it's right. He tried to give me a little piece of tin foil as payment, and I was like, no. Your foil is no good here. But I am definitely looking into what it might take to summon such dice into the real world.

Each time a PAX rolls in and rolls out, it's because the Enforcers believe in it. They must believe it first, and work to make that belief a reality the rest of us can inhabit. And it doesn't just happen at PAX; Enforcers are there for each other year round. That's something you can be part of: an organization for whom the best convention on the planet is only one of the things they do together. Why not start at PAX South? That's the youngest of the shows, and it still needs help. Hit up this page to see how you can make powerful new allies and perform amazing feats on the regular.