Gabe was telling me about a terrifying event that he had witnessed on television, via a show which is ostensibly about children's toys but is also about adult ambitions. It was very difficult to watch. I felt like my teeth were trying to escape my gums and crawl to safety. We started to discuss the sorts of products we might offer in this context, which ultimately lead to the scoping, scripting, and ultimately the manufacture of this comical strip. 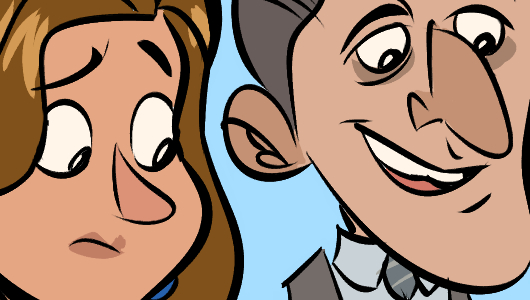 Broodax first "emerged" on the scene in 2007, ten years ago I guess, which is another way of saying I'm old. There was a follow-up immediately after, and then also some kind of Jack Thompson thing. I remember when Jack Thompson called Mike on the phone and yelled at him! I could hear it across the room, and it wasn't on speaker. I remember when he contacted the police about us, and maybe the FBI, but it was a long-ass time ago. He had an idea that there existed some kind of collusion on the part of the entire "Gaming Industry" to defame him, when the truth is just that the Internet does that sometimes. Sometimes a lot people agree at once. It's like those old cartoons, where a swarm of bees becomes a giant fist and then hits a person. It's a process I have a familiarity with, as the fist, and also as the recipient. Every day, we uncover the strange laws of our new social physics.

Hey! Last Thursday was a "very special" Episode of Acquisitions Incorporated: The "C" Team, including as it did our friend Patrick Rothfuss. Typically he joins us as Viari, but he rolled a bit differently this time. We had a blast.

Also, if you'd like to listen to an author go hard on what's considered quality narrative in games, you might also enjoy the episode of Table Talk that happened right after.