Morak was talking to me about a new documentary he had enjoyed on The Hulus called Batman And Bill. It's rare that a documentary gets made that is so applicable to what we specifically do, because what we do is so weird. We have a podcast about this strip, which talks around most of the specific topics, but I couldn't have him not talk about it because the core story was so heartbreaking. 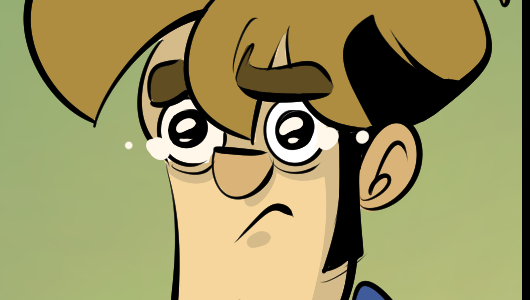 The film is essentially about Authorship. Authorship can be surprisingly complex: if you hang out with a person for long enough, you absorb high percentages of what might as well be Mind Spores. If you spend a lot of time here it might be clear to you, you might be conscious of the microserrations present in Mike's voice - but I guarantee you that whenever we talk to someone else, if someone wants to interview us for some reason, things I say are routinely attributed to him. That's a relatively surface consideration. People who engage in creative work are constantly engaging in theft, what you might charitably term "inspiration," even between good friends. People have "stolen" things from me, but the joke's on them; my creative praxis is similar to that of the 7 Layer Burrito; it's simply a substrate spread with literally everything that happened to be near me at the time. And, besides: what would be the point in complaining? Artists complaining about their hardships is an act universally despised. It will always be vile, and unwelcome, like a sax solo.

What happened with Batman is not like that. And to see it happen in working configuration I recognize instinctively made me recognize it too, in myself; there are only the stories we tell, irrepressible, and I would have done exactly what Bill Finger did. I know it in every bank and whorl of my brain. I would have made all of it for nothing.