I think we wrote something like six comics yesterday; I didn't even have time to engage in base and tawdry mercantilsms. Though I may be the only one; sounds like it was a pretty good day for them. And Gabriel's thumb was swiping all throughout the writing process, ever-swiping, in search of potentially orthagonal values. 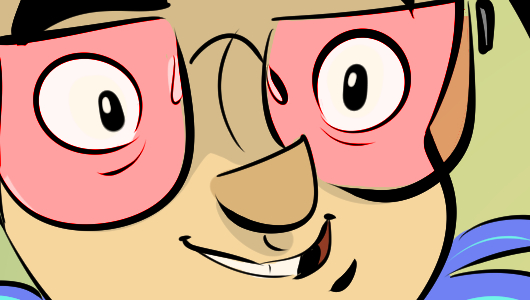 My dad always bought things that were on sale; apparently I discussed this penchant of his years ago, in what has become known (exclusively to me) as "The Yogurt Incident." He had another weakness, which was the purchase of musical compilations sold on television, perhaps epitomized in the form of Freedom Rock. My favorite part of this offer is at about 1:07 where our Seventies Exemplar suggests these albums can be purchased as Four Records, Three Cassettes, or Two CDs, which is something like saying you can get them on Two Cave Walls, Four Heaps Of Cured Bark, or One Mausoleum.

Doo Wop Rock was the other big one. Secular music wasn't allowed in our house, "secular" being the word we had for The Music Of The World, that is to say, any music you might hear. This includes the radio. But my mom couldn't countermand these compilations, which means my musical awareness has this really big hole in the middle but had a lot more detail than my peers cared about regarding the music of the Pleistocene Epoch. Sometimes an eighties song will come on, and people will be like, yes! It's that song from the eighties that everyone, including you, likes!

"Yes," I will say, my feet writhing in their shoes. "This song, by the men who made it."

We have new Pin Stuff available today, and I thought you should know. This New Stuff consists of: