This is just a conversation we had, but it could probably do with a bit of aftermarket modification. 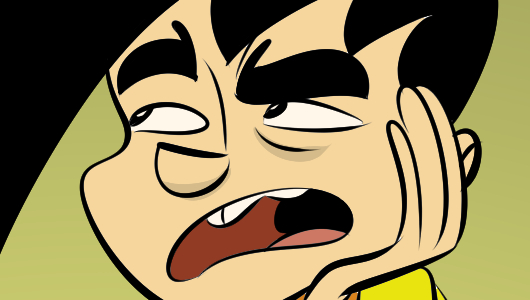 Gabriel and I have both been waiting for Kiko to watch Star Trek: Discovery, and we aren't the only ones. Kiko is not given to broad overtures. He has clearly defined reasons for why he likes things - maybe appreciates things is a more appropriate, more Kiko term. One of Kiko's jobs, even if it isn't written down anywhere, is literally to say No. A Kiko no is not like other nos. A Kiko no, even if we don't pull it apart and zoom in, is the output of an apparatus that operates in cool, subterranean darkness. I asked him what he thought of Star Trek: Discovery, thinking he would know, and he wouldn't tell me. In fact, he wanted me to watch it, and tell him because he couldn't trust himself. His office is a museum of models and paintings, but Star Trek is only represented by a single Ferengi ship on the bottom shelf of a display case, literally right next to two rolls of toilet paper. His Star Trek Collection does not take up physical space because it resides within the chambers of his heart.

Gating Star Trek: Discovery via the pay service I don't a hundred percent get, as established in the strip; it's possible that they've made a determination about the nature of media now and those revelations are enunciated in this model. And obviously, lending aid and comfort to those who would harbor Jim Parsons has a moral dimension - in late capitalism, money and virtue constitute fungible resources. So we had to perform all these gesticulations to get it. But this is what I told Kiko:

This is the most Beautiful Star Trek ever produced, the best Pilot the show has ever had, and the most engaged I have been with Star Trek in years. Decades.

Speaking of the Stream, Mr. Gribbz and I are gonna play some Golf Story 'round 2 or so PDT. I don't know if a golf RPG with a ton of heart constitutes a high-impact streaming experience, but I really want to see it, and I could definitely do with a chill afternoon. If you are looking for the Twitch version of meditation, stop by.