(Here's the strip. I've never had a single interaction with Geoff Keighley that wasn't good, so there's no beef; I just do a lot of public appearances too and it's a very fragile time. Here's today's Acquisitions Incorporated: The "C" Team fic, with art by Kate Welch, that is to say, Rosie Beestinger.) 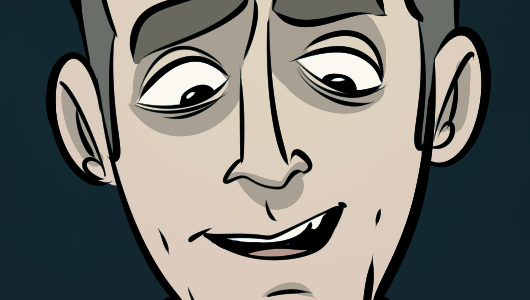 Like a spring icicle, the protection money continued to drip, drip, drip.

It had started with Marvin from the New Ironbark Inn. He'd settled in the northern tip of Red Larch after fleeing the destruction of Nemezir, and being a place of gathering for local halflings word must have spread.

The pouch had contained the two small emeralds that indicated pious deference to her organization, an organization she had endeavored tirelessly to dismantle, but was always sprouting fresh and green in the cracks of her life. The part of her that was and would always be Grandmother Night wasn't going to give the money back purely on principle. But she also knew, wound somewhere in the brass spring of her mind, that sending the money back would not resolve it. They would assume the tribute was light (which, technically, it was). They would assume they had slighted her (which, technically, they had). Then there would be overtures and spice cakes and all manner of nonsense. She hated the grovelling. But it was entirely possible she hated spice cake more.

All the same, she couldn't just sit on the money like an old hen. She abhorred lazy money. What's more, the strange pouch K'thriss had - a marker of his station as a Hoardsperson - was always sniffing the air near her door and it wouldn't do.

The situation of Red Larch was such that children who had been lost on the road would choose the alleys of this small place over the wood or the hills, and with good reason; they were called Fall Apples - a term of endearment - because there were too many to care for, but it was a point of civic pride to comfort them. Rosie's bag was never without the occasional wrapped Cornerstone or crumblecake as a result; she was in the habit of adoption, and though her work often took her from the town there was always a thought for them, particularly if she thought it might be cold.

So it was that Rosie Beestinger became the "agent" of a "mysterious benefactor" who had "been a pirate until recently" and "sought to remedy her conscience with the salve of good deeds." An old, yet sturdy warehouse nearer the quarry was secured under these pretenses, which were not truly pretenses at all. She had always been mother to more than her own kin, and this damned money would do its part in it. She called the place Lighthouse, and it was, in more ways than one.

(Here is the version without the K'thrissmas livery. Thanks Kate!)

To continue the theme, the Child's Play Charity Dinner and Auction is coming up this Thursday at 6:30pm - there's still time to sneak you in, as a group or simply as a very generous electron. Today's savory store offering is ten bucks off your choice of Mug/Moleskine bundle: one fashioned after my cohort's… proclivities, and one bundle designed to recognize you as a figure of taste and eruditon.