I'd heard that the new stress test for Sea of Thieves was gonna be an actual stress test. As in, they were gonna let us come in and try to break it while they were actively trying to break the backend as well. Giving people an experience with your product you aren't completely in control of and which can literally fail in random ways creates novel rhetorical and business challenges, which is why "betas" are mostly marketing and why when we purchase entertainment software it's fucked a nontrivial percentage of the time. 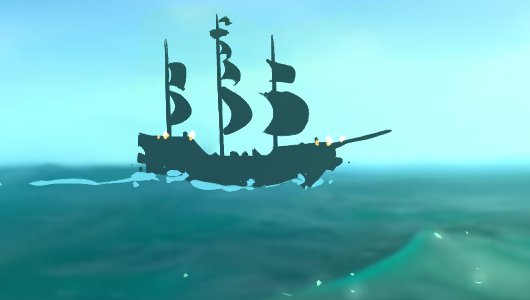 The main difference I saw between this and the earlier version - the only difference that wasn't an improvement - was that it could get very hitchy when you go above or below decks. That's not a behavior I saw previously, and it makes me curious about what is actually happening when you do that. Still played it for hours. I'm told there were several family scale voyages also.

I've fielded a couple questions on Twitter about what the "there" is in Sea of Thieves, and how it can be hard to see. I can't really sell it to you; I can just tell you what it is, because I don't think it's been explained very well. I think Gabe put it best when we were playing the other night. It's an old trunk full of Pirate clothes.

That is what it wants to be, a tool to wear and manifest Piracy as a concept. There's a lot of things it doesn't do, and it appears to have flirted with heresy as a result: you build faction by taking and accomplishing quests, but you don't fill a "gunnery" bar when you you load and fire cannons and you don't craft shit and there are no genuflections towards RPG fetishism. If I shoot your boat there isn't a bar that tells me how many more times I need to shoot it.

You play it because, in my experience, it's a place to be with your friends and accomplish tasks together. The information it wants to tell you is displayed in the world as stimuli. It tasks itself with simulating a solid, reliable platform so you can engage in acts of high-seas derring-do. It wants you to be present and to this end it doesn't drape a lot of incremental, ambient data over everything so the "progress" you feel is based on what you and your friends wanted to do. It's not trying to manipulate you, and it's so gentle about describing its virtues that some people can't recognize it as a game at all.