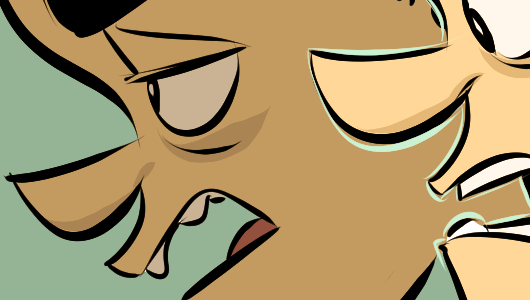 I was overjoyed to hear that Gabe was starting a new campaign; he hasn't invested himself in this vector since.. well, since a long time ago. We've been adjacent to one another long enough to joke about this and have it be okay. It's all true, but if it's any help at all it's not something that happens consciously - quite the opposite. I know it's happening. It's just something I can't help. It's essentially a very specialized form of apophenia, where patterns reveal themselves in a mesh of hidden connectedness. I think that's what I actually am, deep down: a kind of lensed instrument designed to plumb this secret geography. The rest of me, including the body, is just there to make excuses for its ceaseless operation.

He just sent me a map, whose primary characteristic I can't discuss without spoiling things for his players, but I did ask him if he was satisfied with the names partly as a joke based on the strip and partly because I would really, really like to rename everything. It's close! I'm not gonna say it isn't close. Just needs a little sanding here or there; a few hard consonants, like a sprinkle of shichimi, wouldn't go amiss.

I don't want to bring down the proceedings or anything, but apparently there's a new Spire, which means Ryan and I have to slay it. Sorry, that's just how it is. And we won't be heeding any pro-Spire rhetoric and we're single-minded in the pursuit. Those who share our position on this issue should join us on the channel at 2pm PST. Sometimes we have to do battle with some violent geometric shapes near the end but it's fine.