We get up to some shit in Days Gone. A lot of the time the shit we get up to involves something called a Freaker, from the French "friquer," meaning "to freak." They are very unhappy because they dwell in the twilit sliver between life and death. There are many challenges. You can get Prime, but not Netflix. That kind of stuff. The legal substrate is porous. 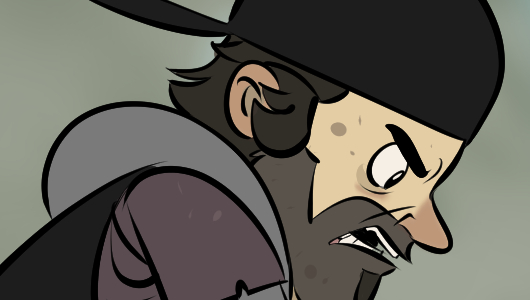 In this particular flavor of Apocalypse, there are also plenty of people just trying to get up to their own shit. We support, through our in-game actions, three such encampments all with their own position on where we exist in their relative philosophies. There are also external factions that can't be reasoned with, well, for certain values of Reason. We can reason with them materially through a dialectic that incorporates a hickory bat through which has been placed a sawblade. This sawblade has been further secured with what I believe is barbed wire. Rhetorically, I mean… it's "convincing."

The choice matrix for those being rescued is, perhaps, more complex.

We've been playing Days Gone in the office once our shit is done for the day, and I think we're probably just gonna maintain this policy on the stream this afternoon from 2-4pm PDT. If he needs extra time to get Monday's strip done, I have my Switch and will gladly fill in with some SteamWorld Quest, subtitled "The Hand Of Gilgamech," because they are dorks. I think I'm about to get some new party members, and my card sense has begun to tingle in earnest.