I've played through the intro of Outer Worlds, and came away impressed and just generally warmed by the experience. It's unfortunate that it sounds so much like Outer Wilds. Every time I type it, I'm like… is it the other one? At least they're both amazing; it's not like there's one you need to avoid. I advocate wholeheartedly for this newly christened Outerverse in its entirety and I think it's standing on firm legs. 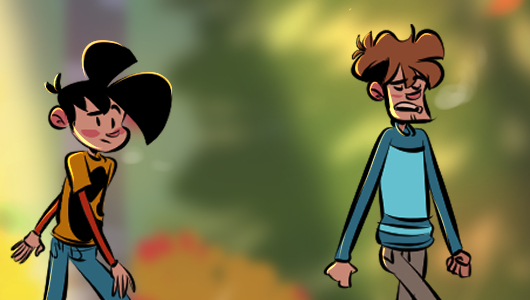 But the strip is from before I played it! So that's why it is how it is. Except now I installed Disco Elysium because it just came out and now I don't know what to do. Historically, you wait for a couple patches to begin an Obsidian game, but… Gah! I don't know which hotly anticipated (by me) RPG to play first. Someone wake me from this nightmare.

It's probably best if I don't go into too much detail on the middle panel, because I haven't cleared it with all participants, but I should emphasize that I felt terror throughout, the terror an insect feels in the shadow of a God's heel. I felt like an atom realizing at some level that there was such a thing as a galaxy. Also, I think we discovered the energy web beneath the Earth's crust! Welcome to my TED talk.

We thought that… I don't know what we thought. You kinda have to figure out what your deal is, you don't always know, and about twenty years ago I guess we were trying to figure out if our deal had a frisson of subservience to a reptilian matriarch. Or any matriarch, really. What really happened that she put her foot on my sternum and tried to claim me, but a person's chest is poorly suited to use as a platform. She ended up twisting her ankle and it hurt for months after that. I'm not sure what the moral of all this is, except to say that some stories are very hard to explain to your doctor.