Once the app became available in English I bit the bullet and ordered myself a Digimon Vital Bracelet. I posted a quick photo of it last week on Twitter and many of you were curious  about what exactly it was. Now that I’ve spent almost a week with it I feel comfortable telling you all about it. I’ll go into detail but basically it’s a fitness tracker that lets you raise and battle Digimon. The device itself is a lightweight bracelet and the Digimon come on separate little cards called DIMs. Each one is a unique digital monster that you evolve through a combination of moving your real world meat body and battles that take place in the watch or on the companion app. 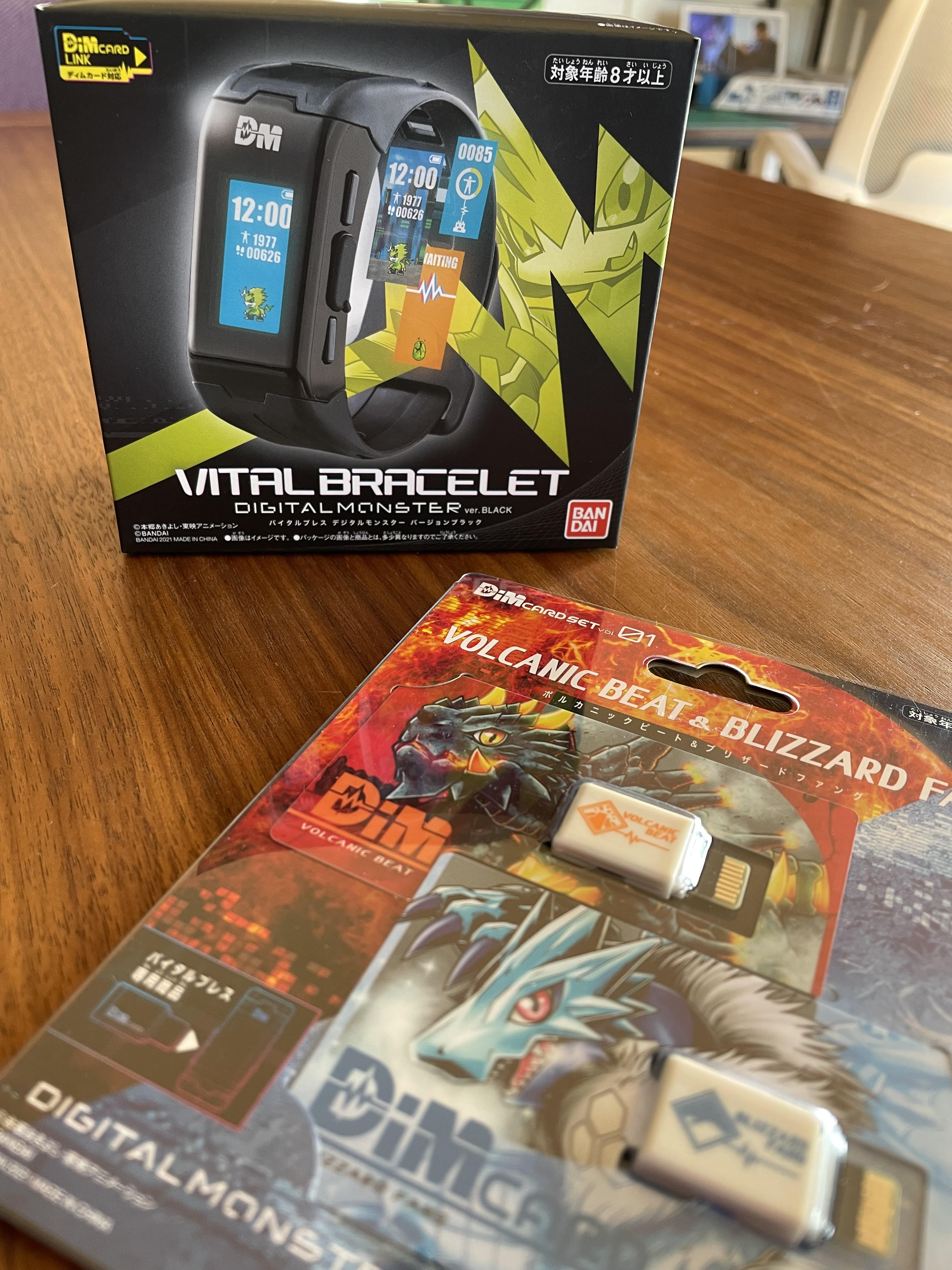 First off these have not quite landed in the US yet. I ordered mine from eBay but you can also get them from Amazon Japan or you can pre-order them right from Premium Bandai and get yours in October some time. Even if you import one like I did, everything you need is in English. There is also an incredible online resource that I have found super useful. With all that out of the way, I want to say that I love mine and I want to tell you how cool it is. 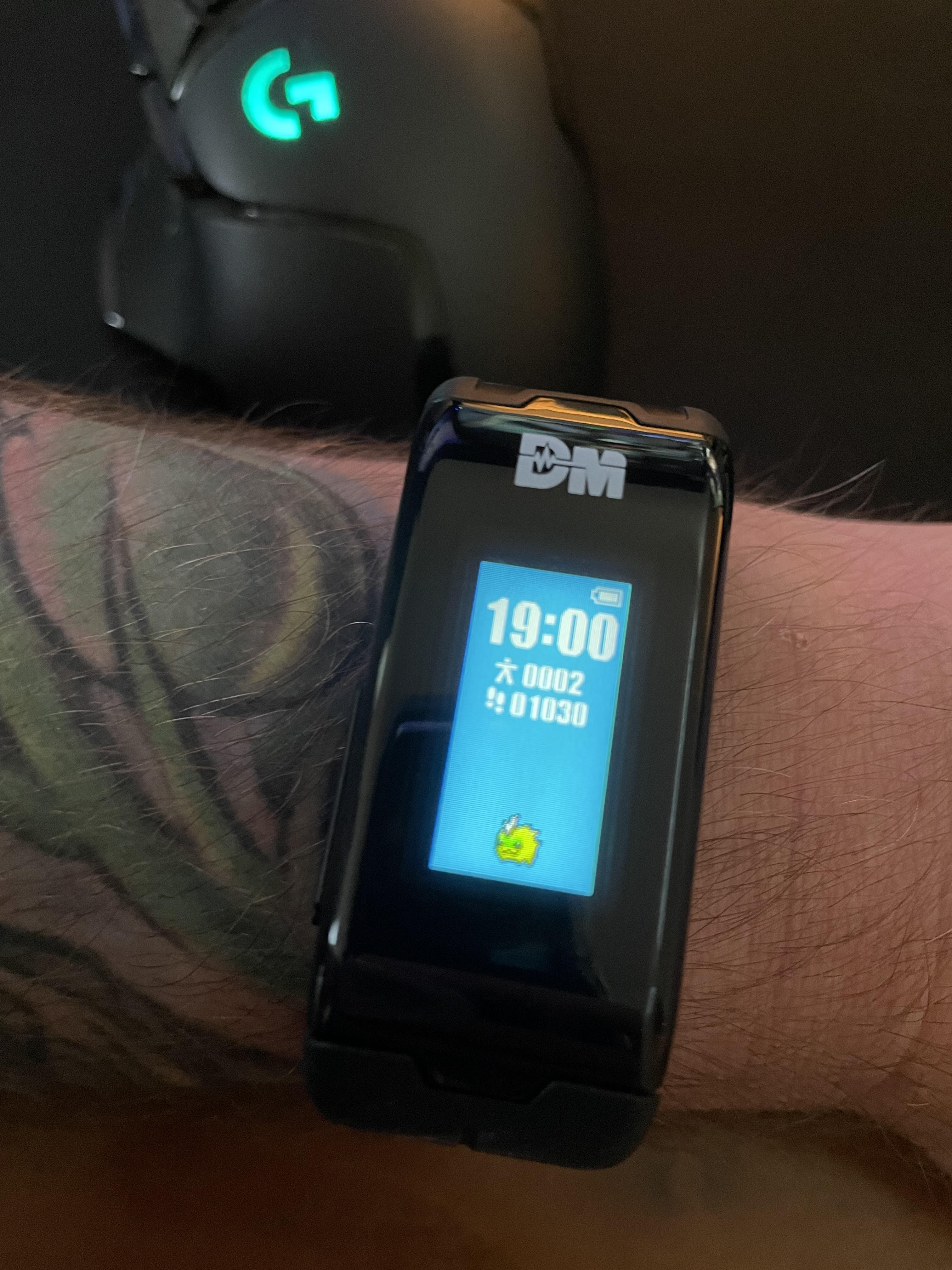 You should know that I have tiny wrists like a baby and so the bracelet fits me just fine. This is a toy for children though and so I have seen a number of people complain that the included strap is too small. There are a number of options if that is the case for you but the TLDR is that you should not let it deter you. It’s very comfortable and light but again it’s worth remembering this is a $60 toy not a fitness tracker that costs hundreds of dollars or an Apple Watch. That being said, I’ve already enjoyed it more than either of those other devices both of which I have owned previously and here’s why.

I don’t like exercise. I find it incredibly boring. Even if I have a book or a movie going or whatever it might be I just don’t find exercise interesting. I understand it’s not supposed to be interesting, it's supposed to make you healthy and keep the cold bony hand of the reaper at bay for perhaps one more priceless second. I don’t super care about that. What I do care about is raising digital monsters! 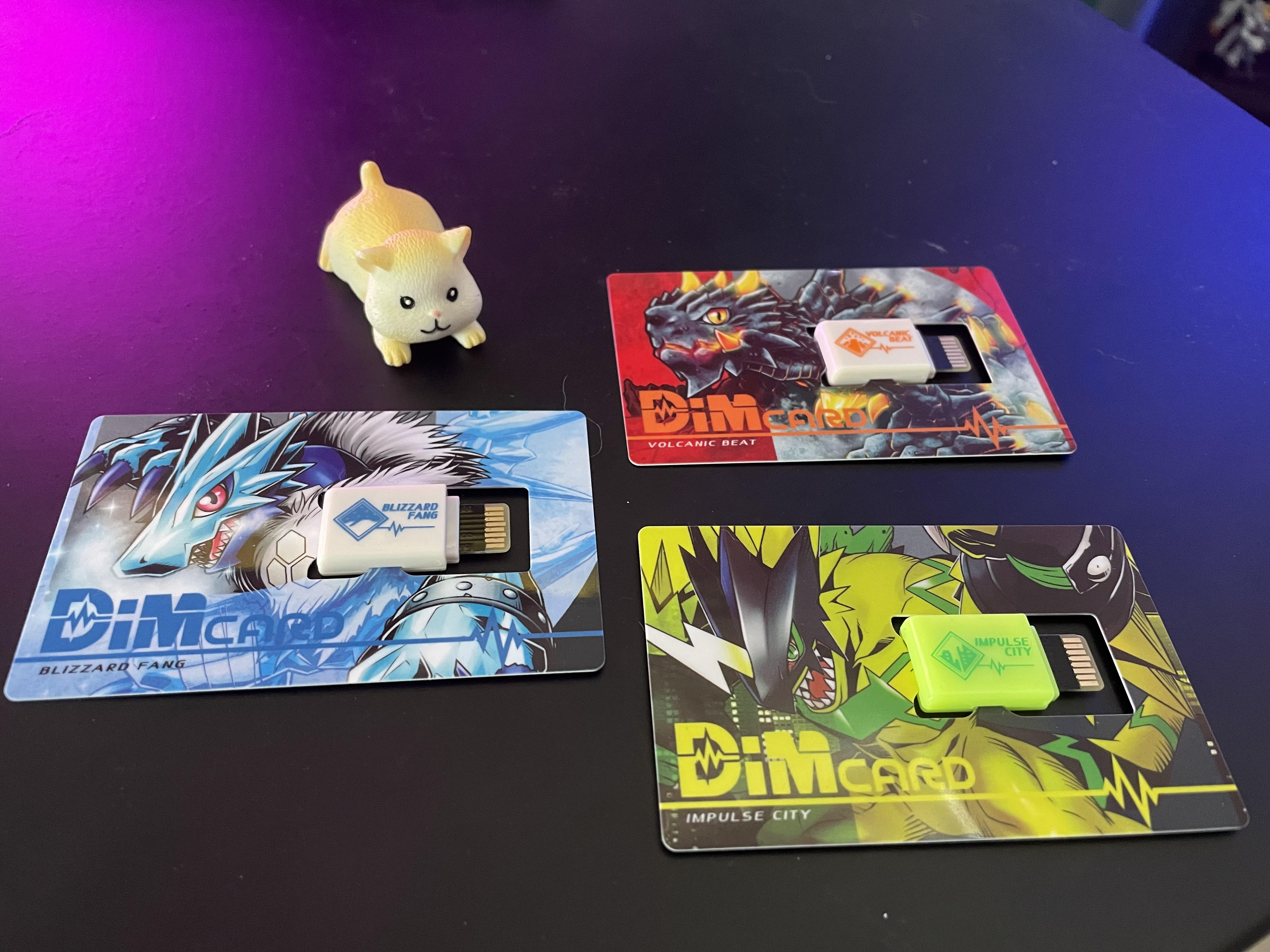 I decided to give Pulsemon a try first and after plugging the DIM into the bracelet I was shown a tiny egg. The first couple stages of a Digimon are relatively quick and don’t require you to do much other than wear the device. After a few hours I had a Pulsmon and thanks to the handy Evolution Guide by Humulos I knew at least mechanically what I needed in order to get the evolution I wanted. Each DIM contains an egg that will grant you an Adult Digimon but there are many ways it can evolve from there and they are all based on your effort.

When evolving the Digimon will check a number of stats:

-How many Trophies you have (earned through exercising with the bracelet)

The Vital Bracelet sort of tracks your steps but they call them Miles and they are not quite one for one. Again this is a toy for kids but accuracy of its step counter isn’t really the draw here. From the bracelet you can take challenges that will earn you trophies. They are simple exercises like squats and crunches. You can also take an adventure challenge which I’ve done a couple of times now. During these the device gives you a goal to walk a certain number of "Miles" and you will encounter battles at various stages. As someone who doesn’t ever work out I found getting to 8+ Trophies and 1,200 Vitals a decent challenge. I went for a hike with Kara and Noah the first day, did the daily exercises it asked for and then took the dog for a walk the next day. It was an uncommon level of exertion for me and I certainly felt it but I managed it. You should know each Digimon has an activity level they require to stay happy. Some are sort of lazy while others demand you get off your ass more often. The Pulsemon I started withy is considered "normal" for what that's worth.

I got a Digimon who only needs “moderate” exercise but for me that was a lot. Still, I managed to get the evolution I was after! So far I’m really impressed with the device and the companion app. #vitalbracelet pic.twitter.com/ACF5b6ZYHs

Bulkmon was my reward but he demanded a lot more activity not only just to keep him happy but in order to get another top tier evolution. The time you have between evolutions is longer each time but the amount of work needed was still a significant jump. I decided to raise the other two Digmon I had to their respective Adult phases as I found that level of exercise to be a good starting point for my ancient and atrophied muscles.

You can transfer a Digmon from your bracelet into the companion app on your phone whenever you want. Doing this will allow you to pause their development as well as battle with them. You can also store your Digimon here and then swap them back to the bracelet when desired.

In the week I’ve had with it I’ve really enjoyed the Vital Bracelet. If you are a huge nerd (like me) who is looking for something fun to help get you motivated to exercise, this is the ticket. Gamification is a strong motivator for me and if I am being honest, so is collecting. My son Gabe said he would be into this if it was just an app he could grab and I understand that mentality 100%. I have to say that for me I think a big part of the engagement comes from the fact that these Digimon come on cards and must be raised on a special device. I enjoy the whimsy of tapping my phone to the bracelet and seeing my Digmon jump between them. It reinforces the fantasy that these are little monsters and not just an app. Should adults feel ashamed about using a kids toy like this?

We live in a burning, plague ridden Hellscape, and in the end all of our steps just take us one step closer to the grave so I guess I'm not super concerned if someone doesn't like my Digimon bracelet.

I haven’t covered everything here but hopefully I’ve given those of you on the fence about getting one the info you needed and maybe I’ve introduced a few people to a cool toy they had never heard of. I’m feeling ready to tackle Bulkmon now and his hunger for more Vitals. I was up this morning doing some crunches and the dog always needs a walk.