Whatever you may think of me now - how I comport myself, what I "get up to" - I'm fried dough compared to my previous incarnation. He was not exactly done in the middle, and that is being diplomatic. I had to endure successive annihilations to shave down a variety of sticky-outy bits which made being around me complex and not in a Pinot Noir way. More like complex in a fuckin' shut up way. I see that Michael has rendered me with the teabag I would occasionally tie to my glasses because I liked the smell. This was around the time I started wearing sweatpants exclusively - I realized that while I was required to go to school, I was not required to wear uncomfortable pants while I was at school. The realizations only bloomed from there. I came to understand I was also wearing a host of constraining ideas that were of no benefit, either. It was around this time that I invented the hippo. 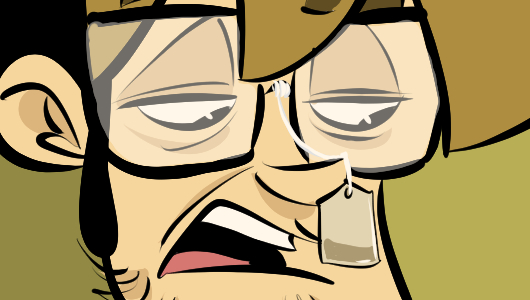 Some online have asked that we invert this comic, and show Gabriel's future path, and so we just wrote it. Certainly, engaging in this kind of behavior is redolent of Dreaded Continuity, that treacherous force wise men must ever steel themselves against. I vow to resist it.

With the kids back in school, and with my eldest going to a high school out of range of the buses, it's really done a number on when I can pop in and stream - it's fucked it up pretty bad, honestly. Until I can figure out exactly how to resolve these things, Tuesday and Wednesday are probably the only days I'm gonna be guaranteed to do it. They give you a city bus card, but if you're talking about a kid on what they currently call "the spectrum" there's some significant scaffolding that is gonna have to occur to prepare them for that and it's got to be my priority.

What that means is that currently Golgolfa on Wednesdays and the Motorsports Manager streams are essentially paused until I can rewire a human mind to identify fear as opportunity. Let's see how this goes; somebody start a clock.