They've gotten Elden Ring down to a seven minute speedrun apparently, and I think we can all agree: that isn't a very long time. I regularly stare at a blank screen that long, sometimes between sentences, and I don't have anything to show for it. I certainly haven't been the culmination of a prophecy or anything. I haven't culminated shit! 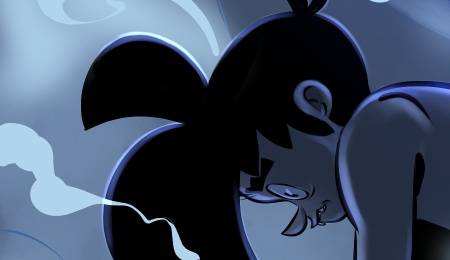 Dear God, getting a run down to this level looks like a huge pain in the ass. I wasn't familiar with the type of skip that involved exiting and reloading the game, but it functions something like a spell and the gamer who resorts to it is surely damned. It's hard to imagine where it goes from there, but we did it anyway.

I'm heading over to Spokane for Easter, so I won't be able to strim with Mork this afternoon, which sux. A man could get used to hanging out and, like, being a clever fox with their friend all afternoon while you foot after foot of fruit. He said he was probably still gonna stream at 2pm Pacific, and probably Warriors of the Eternal Sun, especially since he was able to seize this wisdom-packed tome:

As soon as @TychoBrahe left I ordered a copy of the hint book. Found it for $30! pic.twitter.com/34AZbj3rgK

Oh! Hang on. Ronia has a message for you:

If anyone who is reading this currently ships the My Hero Academia ship BakuDeku, please rethink your life choices. :)

Hopefully that reached the intended recipient; it seemed like it was a pretty big deal.

The guide has not showed up yet but it is on its way. I think I'll stream Valheim today instead. Show off the family server.

Also good. I liked what I saw last time.