Maintaining even a single mechanism like this in your mind, functionally, with all its eddies and cheeky exceptions, isn't without a strange kind of labor. For years, when I had to fly all over the place, bringing a new rulebook on the plane and trying to build that exquisite clock within my skull has been my primary form of entertainment. I assemble it in my mind until nothing I read surprises me. This process typically knocks me completely out. 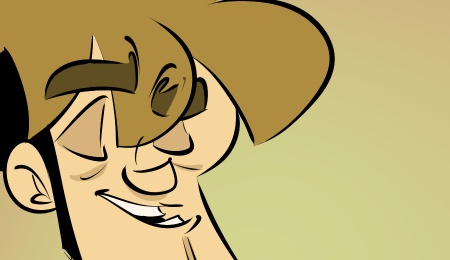 Gabe doesn't go in on something unless there is no bottom, and wargaming is at least three hobbies at once. First, it's a craft hobby. You build and paint dolls - I mean, models - you build and paint models and dollhouses, I mean terrain for them to inhabit. That's the first one and in any other context that would be the entire hobby. Some games, like Dust or X-Wing, skip this step with prepainted stuff.

The second threshold of the hobby is deciding what to put on the table when you are going to play. Essentially, the size of the game you want to play offers you a points budget, and you need to optimize the list of units that work inside that. There is a surprising amount of game at this level, and conversations, and apps, to say nothing of the fact that these games are alive and played in tournaments, which lets you know when a faction is too big for their britches - resulting the equivalent of patch notes that alter the values of models.

Note that there have been two paragraphs before I got to the game, which is where you make your special dollies kiss and dance with their guns and swords. These games exist at every scale you can imagine, dedicated to every taste - brilliant indie historicals like Saga or Chain of Command, Solo or Cooperative campaigns like Rangers of Shadowdeep or (our friend Adam's!) Space Station Zero, many of which are completely model agnostic so once you have a set of themed minis painted you can play as many of them as you like.

The only problem is that, when you start to play more than one, your mind starts borrowing pieces from the others and (in the manner of a Star) entirely new games that only exist in your mind are created and burn out of existence every second.

Speaking of wargames, and also the learning of wargames, we were honored to do a sponsored stream for the newest Kill Team expansion called Into The Dark. Yesterday was the first of three streams, actually… in the first one, we were just painting a spooky Haunted House in space called the Gallowdark:

But the whole schedule is here! 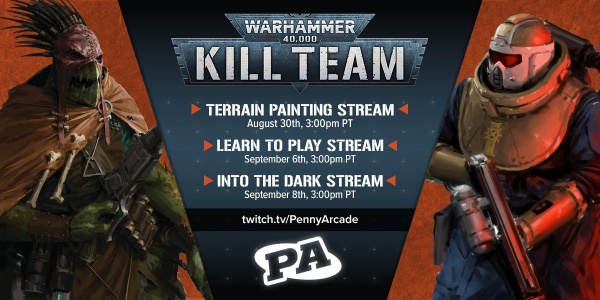 On the 6th, I'll be teaching Gabe and Kiko the ins and outs of Kill Team mechanically, using Keek's beautifully painted Imperial Navy Breachers and a Kroot Farstalker Kinband. Because the game takes place in claustrophobic conditions, there's a few twists to the ruleset that model this nasty, up-close form of conflict. Then, on the 8th, we'll play another game now that they have their feet under them. Kill Team is a very different way to play in the Warhammer 40k universe, with maybe six to twelve models total per side - it's unlike the larger, table filling conflicts you might have seen at your local game store, and the earlier version is what got me back into this range of games. Into The Dark echoes a lot of our favorite stuff from an earlier version of Kill Team, with incredibly cool modular terrain that can be built a ton of ways. I'll teach you, too! Come hang out.