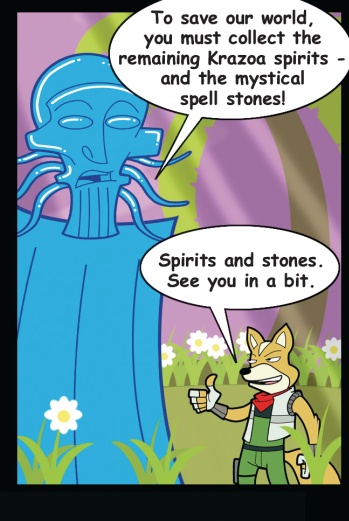 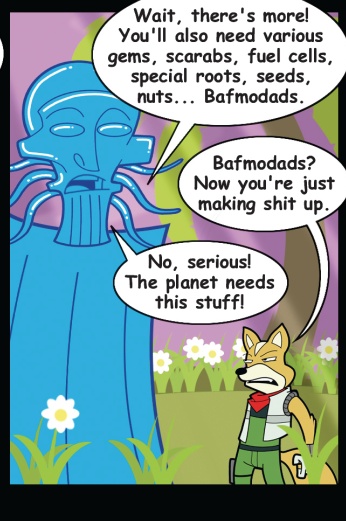 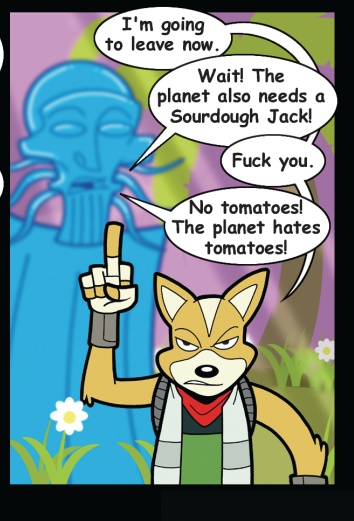 Gabe seems to like Starfox Adventures well enough. I haven't jumped on all that many platforms since The Killing Game Show years ago, so it's probably not my place to say - but I don't think this is a game I could play for any extended period of time. Every mission I've seen is nothing more than an unbroken string of petty indignities.

Between that and Sly Cooper, though, Penny Arcade is practically a FurCon now. I already have a bee suit, so I'm ready for pretty much anything after the show.

Gabe and I tend to split the cost of games, it's a ritual that started back when we were importing shit like Kings Field we could never afford by ourselves. It so happens that I will pay half on some games I don't get to play all that much, but there's enough times where the system serves me right to maintain it. I brought Sly Cooper home with me because Gabe's playing Starfox, and he can't be bothered with it at this point. I popped it in because I needed something to do until I was tired enough to go to sleep.

Sleeping is something I've never gotten the hang of. I don't know if I need classes, or what.

Regardless, Sly Cooper (as I was to find out) was more polished, more beautiful, and more fun than I expected - and I expected a lot. I was looking at Shinobi for the PS2 at this last E3, drawn from screen to screen by the peculiar gravity generated by conventions of this kind. Before I knew exactly how, there was a man asking me very politely if he could show me his game. Well, yes, you may. I love games.

When I first looked at it, it was beautiful to look at, but I'd seen about fifty cel-shaded games before I saw his. I resolved myself to endure the pitch. When I saw their character gliding through beautiful environments drawn from classic animation - wild with flagrant proportion - I felt like some kind of jackass. I told him to wait while I pried Gabe off the Shinobi screen.

My only fear after playing it ALL GODDAMN NIGHT is that I'm almost done already. Like many games of this type, you are treated to a "percent complete" statistic whenever you do anything of import. After beating the first boss, I was at Twenty Percent after an hour or two of play. Now, this was great play. It's fun. It's classy and stylish. You will be delighted by satisfying, diverse gameplay and treated to mission prologues that set up each level hub as an episode in an exciting continuum. But I'll bet we're talking about ten, twelve hours through as a straight shot, doing some side-quests. They have made the side quests very worthwhile, in my opinion - recovering a set number of clues in each level allows you to open that zone's safe, which includes nothing less than a special maneuver - but they're not required, and you may not care. Getting the most out of the game would also mean doing time-trials of previously completed levels, something I have (historically) not been up for. So, now you know everything. I love it. But I'll bet that if you played like you meant it, you could beat it in a day or two. If the game were less awesome, I wouldn't care how long it was.

We had it in our heads to get Robotech, but the strange, wishy-washy reviews scared us away.

There is some kind of gaming festival tonight to celebrate Gabe's Birthday, also known as The Christmas In September. We expected games to get changed out a lot at the last game night, but that's not how it went down - Soccer Slam went in first, and never got out. We thought we'd try out MLB Slugfest 2003 this time, just to see if it caught on with the group. Have you ever played it? We'd never have heard of it if it hadn't been in the EB kiosk - it's one of these fast-paced, arcade-y sports games, like Blitz, Jamz, Hitz, pretty much anything with a Z at the end. We didn't catch it at the store itself, but when we put it through its paces yesterday we were treated to the most surreal sporting commentary ever. Make one of your friends buy it, or rent it or something. I did not expect to laugh outloud at a baseball game, but there you have it. That's something of an accomplishment.