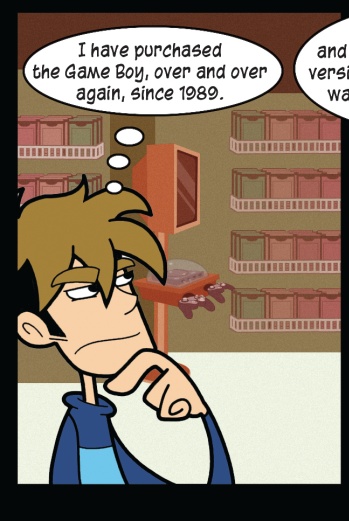 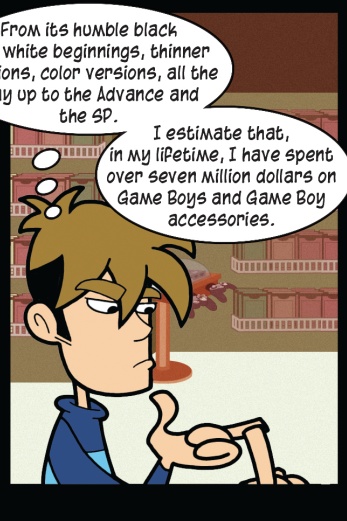 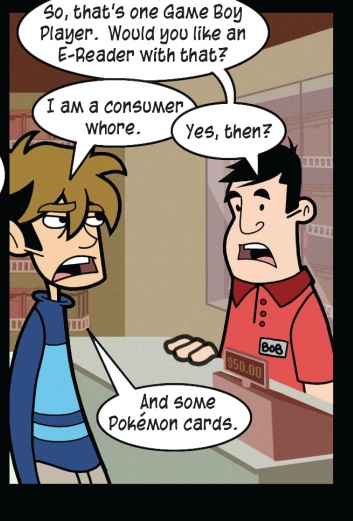 The original Game Boy was the first dedicated gaming appliance I ever purchased, and I have kept up that tradition dutifully. It's a pretty slick package, and though the software that comes with it has some features for sharpening or smoothing the graphics, etcetera, the bottom line is that is lets you play Game Boy games on your television, a la the Super Game Boy. Any individual features are corollaries to that. A reader asked me if the device colorized older Game Boy games like the Game Boy Color did, and I assume so, but I don't know - I must have lost my older games in the move, which makes my heart ache. Another reader wanted to know if it can play imports, and I can't imagine why not, but I couldn't tell you one way or the other. I'll ask Travis, I bet he'll know. The only questions I can actually answer are about Advance Wars 2, I'm afraid. For example: Is it awesome? Yes.

I received a distraught mail from a Penny Arcade enthusiast regarding the sorry state of game releases at the moment, and while I was familiar with his emotional state, I haven't been really seized by that in a long time - about two years, probably. I'm playing Midtown online, some Desert Combat, Advance Wars 2, shit, what else... Shadows of Undrentide, playing that a fair bit, still enjoying Carcassonne, I don't have time to play all the games out now. The only reason I'm not playing more Raven Shield is because the 1.3 patch fucked it up. Then there's the imminent games, games which are nigh, like Ape Escape 2, the new Armored Core, Pirates of the Caribbean - yes, for real - and I was thinking about trying to pick up Naval Ops and Elite Force 2 today.

That doesn't even take into account the imports we got yesterday, Viewtiful Joe and Metal Slug 3, which I'd be happy to talk about more if you want. They're uniformly excellent. Since we did that series on The Sucking a while ago, what I see as "doldrums" in the release schedule hardly affect me at all, because I have diversified my holdings so to speak. Between the PC, the warring consoles, portables, and the ability to import games from anywhere in the world, I never want for stimuli. Even if there is a dry spell this elegant stratagem cannot resolve, spelunking used bins or flipping through my CD holdy thing typically reveals games ready for the limelight.

At the risk of kick-starting another Activism Phase for Penny Arcade, I would like to link you to this interview with some RIAA fuckhead. As president of the RIAA, Cary Sherman might even be considered the RIAA fuckhead. Good God, the man is intolerable. I'm not saying that because I am trying to orient myself and geekdom as his opponent, thereby granting you a simple dichotomy. I'm saying that because he sounds like a terrified, tiny man who has absolutely no idea what he is in for. It was their activities under Hilary Rosen that truly unleashed Peer to Peer file sharing to begin with, with a barrage of legal attacks that amounted to the most fabulous PR campaign ever. I said at the time that if my Mom knows about Napster, then they fucked up big-time. Let's say these guys do start arresting people for downloading music, for having these files. I don't share their view that this terror will cause people to stop doing these things. Here's what I think it will do: instigate a mass evolution in public digital consciousness. Because that's the other way it turns out - instead of people being scared, they defend themselves with new technologies designed to obfuscate their origins. Because if regular people, my mom included, begin to understand the personal and political ramifications of encryption? Think about it. It's not impossible.

they're not going to get us