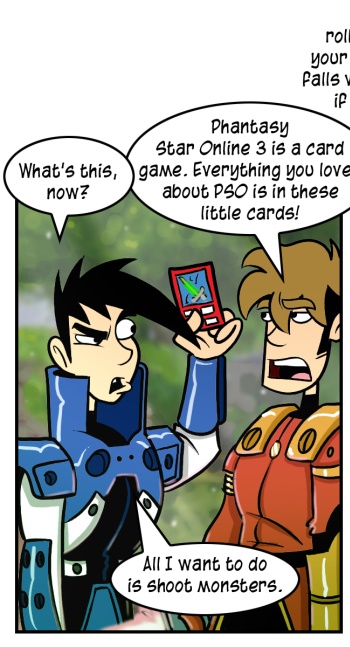 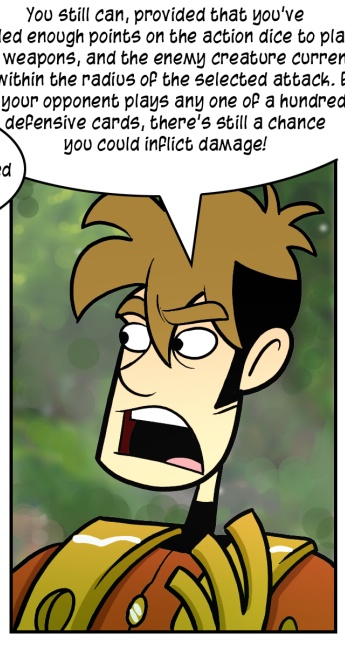 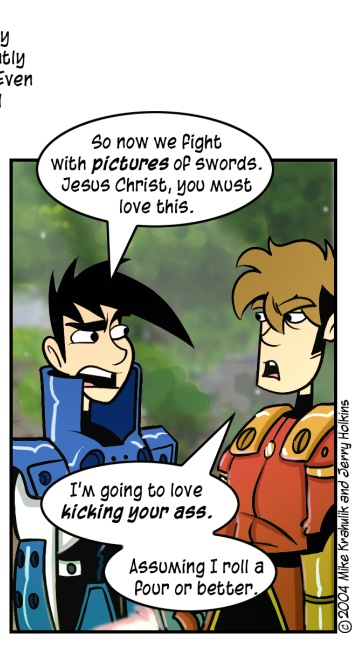 Picked up Phantasy Star Online 3 Wednesday, and it ain't bad. Humans seemed surprised when I claimed enthusiasm regarding the card-oriented gameplay shift, heresy of heresies, but by now it's probably clear that I could replace anything, everything in the world with a card that represents it and feel nothing but pleasure. Conceptually, yes, I do like the idea that the events of even the prior PSO games could be described by the card metaphor - that the structures and definitions retain meaning across a mechanical shift. As all this poetry here might imply, I was ready and waiting for a new interpretation of the game.

Gamespot's review calls the game a "conundrum," which is something we agree on, though we differ on why. They say it's because they've switched up the game metaphor for this card thing, which makes it difficult to recommend straight across to PSO fans. I say it's because they have a pretty cool card game that is encased in mediocre graphics and suffers from a primitive user interface. Envision a creamy game at the center of some foul tasting lozenge you must suck with determination and you will be very near the heart of it.

Visually, PSO is aging like a corpse in the sun. It was always difficult to tell from released screens or whatnot if any improvements had been made to the characters or creatures in the game. I'm here to tell you definitively that it's not true - as though selling practically the same PSO over and over again weren't enough, now they have made a new game, smuggled in all the old art and hoped no-one would notice. There are beautiful cutscenes that use new illustrations, try to enjoy them as much as you can because aside from the static battle rooms that's pretty much what you get. Much of the art for the series has always been interesting and imaginative - with a turn based battle system, why they didn't take the opportunity to really envision their world is a mystery to me. The game doesn't ease you into play at all, either - a series of obtuse menus, like gates of fire, will haunt you.

Of course, the O stands for online, but without any kind of voice support, no keyboard, and monthly charges I don't know how much of that I'm going to get into. It has the lobbies PSO fans already know about, you can do battle with other players and take missions on the world just like you might have in the other, prehistoric versions.

The game at the core is a pretty interesting hybrid card game, which is why the presentation and menu systems irk me so much. I say Hybrid because you've got some movement and placement issues like you might have in tabletop strategy, in addition to any card oriented shenanigans. Luck is a part of any deck based card game - will I get my 4/4 Shieldbearer Munchkin in time? - but there's another layer of luck in PS03, the Action dice. The Attack and Defense points you have to play cards and attack are determined by random rolls, so it is entirely feasible that you will never roll well enough to do anything substantial. This happened to me yesterday, in fact. Deck builders will likely rejoice in the two distinct sides, Hero and Arkz - the former may equip the items you know from PSO, the latter may summon the creatures you remember from PSO to do battle. In our own tests, a new Hero character will pretty much beat a new Arkz character every time, which we're thinking is just a distortion created by the limited decks in play.

It's not a bad game, but it's not as easy to get into as it should be and the level of recycled content is almost unconscionable.

Ninja Gaiden, as it turns out, was rather a sound investment. I didn't know quite what to make of the demo, as I'm sure came across. It was hard to know if what I was seeing was a template for an entire game or merely an introduction, if I was going to see these same dumbass ninjas in every corner of the globe this probably wasn't a place I wanted to go. They switch it up on you almost immediately, though - coming at you with multiple types of opponents simultaneously that will pierce you with a spear from horseback and then drag you around behind them. That's not an allegory I'm making, that actually happens - and it's not even a boss, it's just some asshole riding around on a horse.

It's the sort of game you might have played with a friend of yours around, a friend like a ripcord, to be entrusted with the controller once you reached realms too difficult to surmount. It's got that kind of difficulty. It's also got that kind of satisfaction when you kick off a horse guy and, in the manner of a cultural festival, demonstrate for him the deadly arts of the ninja.

I keep typing "there are issues with the Gamera" for some reason, implying that there is a problem with our ancient monster turtle. He's fine. There are issues with the camera, however, but I'm so tired of having to mention that the camera in a Japanese action platformer is bad that I would like you to please assume that the camera is terrible in whatever game I'm talking about. If I were to talk about caramel, you'd understand that I meant a golden, chewy candy without my having to resort to specifics. Let's get to that point with these Goddamn cameras. I mean, am I the problem? Is my burning desire to see the enemies attacking me a part of some dark and undefined complex?

coming for to carry me home