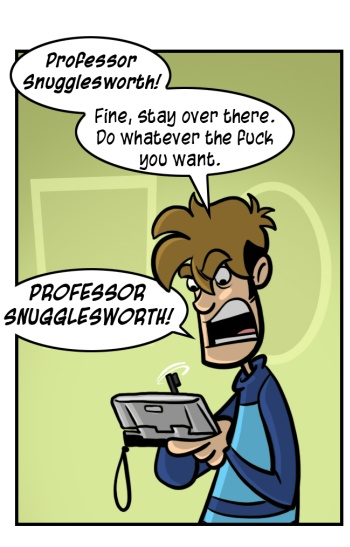 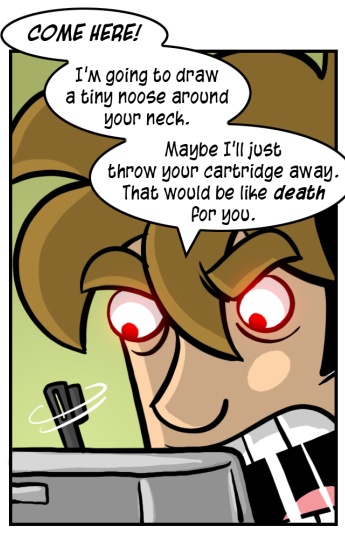 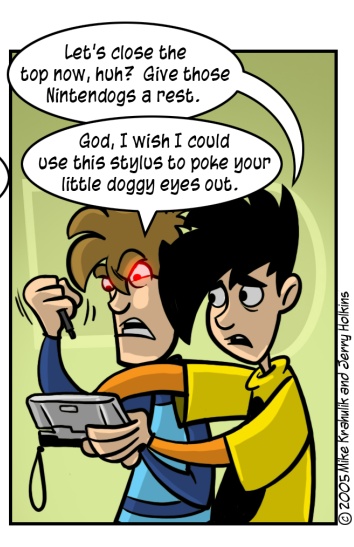 Precisely who does one call when they find someone has been abusing their virtual pet? Is there no celebrity associated with this cause? Because I think it's fair to assume that the phenomenon is on the rise.

I have been surprised to see how well Nintendogs has reviewed at the major sites. The game represents a kind of "curveball" to the reviewing apparatus. I didn't expect poor reviews exactly, the enmity I project toward them being (largely) showmanship - but Nintendogs is not a game for the sort of person who works in enthusiast media. I don't know that my lexicon is any better suited to it. It turns out that the game is just sort of Goddamn irresistible, and it doesn't really matter who you are. It is a pet sim, in any case it's a sim where you do a lot of petting. It exerts what I'm certain is a kind of illegal mind control, hooking itself into those portions of the brain responsible for protecting tiny balls of fur.

I've known for a long time that it was a game with dogs in it, and pictured myself rubbing the dog in various places and so forth. Let it be known: dogs get rubbed in this game. I was right about that much. You brush, scrub, rub, and welcome your pup into its ghoulish, emulated life. You might know this already, I missed it because I was ignorant and reveled in that ignorance, but it's the game's use of voice that seizes the very machinery of human empathy. This starts with naming, and moves on to training with verbal commands.

It can be trying (as the strip suggests), before you learn that enunciation is more critical than threats or volume. I initially named my hound dog something barely pronounceable: I would describe it as the sound a straw makes when you rapidly push it in and out of your shake cup. It was so ridiculous that I could not produce it without laughing, as Gabriel the Elder will attest. I had to discard the creature, collapsing his universe with the button combination that means destruction.

It felt momentous to me, of course, but that's because I'd just distinguished that entity from every other, as Adam once did. I doubt the simulation felt any undue stress. You'd imagine that his replacement would feel some trepidation as he scrabbled out onto the hardwood, the fruit of my wrath now evident, sun-ripe and taut with doom. No, he was just thirsty. And so I set about devoting my life to Sunderer, the black dog of Hell.

One of the defining characteristic of "pet" games is repetition, and so I'm somewhat loathe to break down every interaction in the post if you will go on to iterate them hundreds of times. Let me say that what distinguishes this game for me is how tactile the experience is. A tremendous amount of effort must have gone into these interactions, but when you scratch a puppy on this side and she leans into it, something primal is activated that feels genuine and unstudied.

It's also a kind of Voight-Kampf test you can use to determine if your friends are replicants. I'm not saying you're a robot if you don't buy it, this probably isn't what many readers are looking for in a "game." But they've made something that is difficult not to respond to.

The game can be set in Bark Mode, wherein your scruffy envoy is sent to other DS systems to play via wireless means. It also sends along a greeting to other players, a feature I fear will be dreadfully abused, because basically the first thing I did was abuse it. I recorded a message of such foul and unreasonable intent that I would be ashamed if another person heard it. You record it on what is called "The White Record," and it is in every way like a real one, where once you have recorded your profane salutation you can proceed to scratch and cut it in the manner of MTV Raps.

should have insured that planet