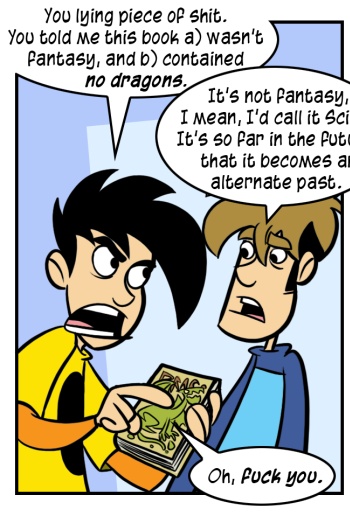 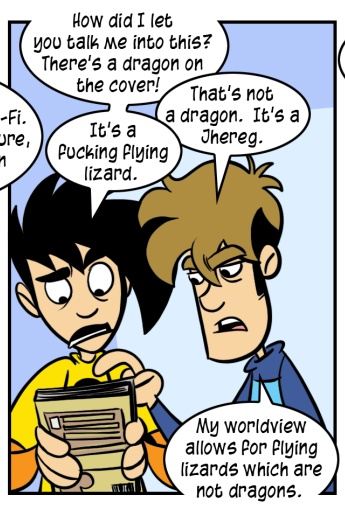 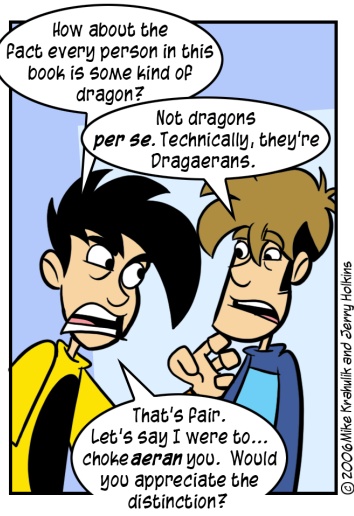 I mentioned that Steven Brust was the sort of man who would be well received at an event like Readiation - a fictional convention for fiction enthusiasts - and had such a high opinion of his work that I brought some in and attempted to "sell" Gabe on it.  It's about an assassin who runs an increasingly large area of town, in a place where teleportation, telepathic communication, and even resurrection are an everyday occurrence.  You've got some "local color" language in there, but compared to most fantasy it isn't about fancy, vernacular diction.   The delivery is very modern.

Except for the punchline itself, the comic is our authentic conversation.   After we had finished yelling at each other and decided to make a comic about it,  I tried to give him a sense of how much he would hate the book I'm reading now - The Phoenix Guards is set in the same world, and by the same author, but is written in the style of The Three Musketeers.  I can picture him touching the cover, hesitantly, and then crumpling into a sleep like death.

While visiting Table of Malcontents - the Wired blog of personal hero Lore Sjoberg - I came across the single button sensation Chopper Drop. My immediate reaction was not joy, but remorse. Remorse!  Someone once showed me a charming game called "Sky Puppy," written by a friend I was vociferously assured, and I promised to mention it and then did no such thing. I am sorry, young man who did not under any circumstances write an attractive, accessible, adorable game. Your secret is safe with me.

I don't know if you are an Xfire user, I assume it's very popular indeed, because I'm often being asked what my Xfire is, "man." They're handing out beta slots to Sword of the Stars just for mailing them your account name, which is a trivial amount of work for something you might enjoy quite a lot. I say this because I have played almost nothing else for a week.  Indeed, I had a fever this weekend, and I experienced dreams about the game that were so gripping, so true to life, and in their way terrifying, that I now believe the future described in the Sword of the Stars wiki to be the accurately predicted future of our galaxy.  Going back a moment: "betas" these days are part of the marketing push, and you tolerate oddities in the game because you didn't have to pay for it.  That's not what this is.  If what you get is based on what I have here, I would say it's probably finished.

It was my great pleasure to write the introduction to Kristopher Straub's newest book, a collection of his Starslip Crisis comics entitled "Sparkling Diplomacy." I meant to link the Goddamn thing over a year ago, back when it was still called Starshift Crisis, but they had just launched Blank Label at the time, and there was some fear on my part that a link would do some injury to their venture, if not flood the colocation facility with the equivalent of digital lava. So, yes: Starslip Crisis is one of my favorite online comics. Storylines I especially enjoyed from the series would be "Hardware Pirates" and "The Compound Pluperfect," but that's because they appeal to my own predilections - I wouldn't start with them.  I'd recommend that you load up the First Strip and then consume the first year like starving men and women.