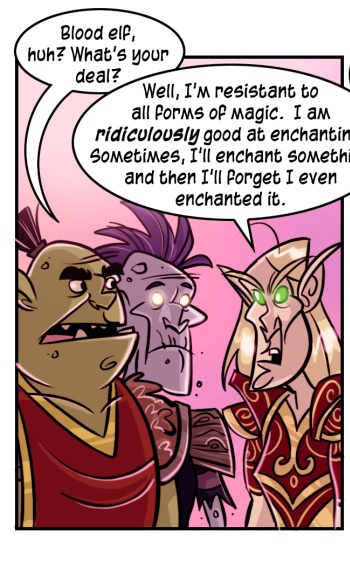 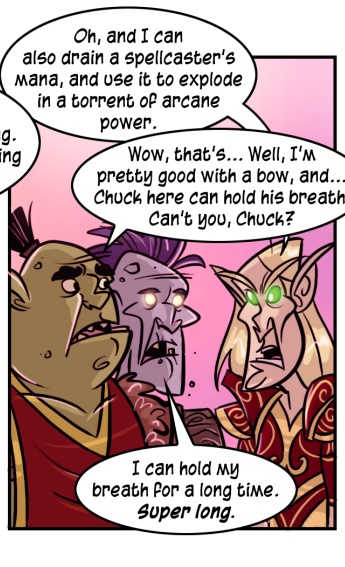 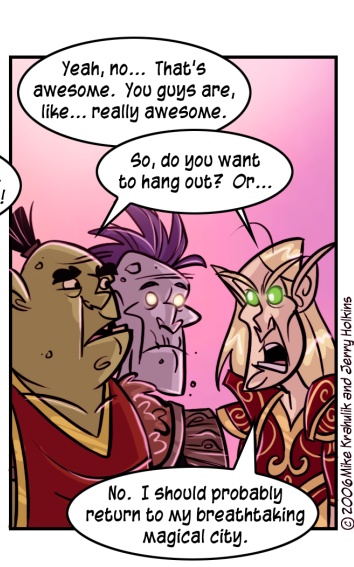 The Burning Crusade expansion for WoW is coming, so named because of how the game devours human lives, leaving them a smoldering ruin. It offers up a new race for Horde players in the form of the Blood Elves, whose potent innate abilities and supernatural homestead almost - almost - make up for their unstoppable urge to feed on demonic energies.

We did a bunch of comics for Brady's first WoW guide, and they must have been well received because they've asked us to contribute a few to the BC guide also. Hurrah!

Joystiq linked to some "leaked" shots of a few Playstation 3 titles that will make up their answer to Live Arcade/Shop Channel - and they're stunning. Okay, the Sudoku doesn't really look stunning, but they did the best they could with the available material. I'll say it again: for those games whose primary goal is not juggling integers, I find the quality of these images shocking.

Sony's online service (which shall remain nameless!) is "free," but there's not a Goddamn thing on this Earth free.  Someone is always paying for it, it's just a matter of how much, and how long they're willing to continue doing it. I'm not making a dark proclamation, unless you think the way the world operates is dark and I'm simply reaffirming your position.  In this case, you are paying for it.  Not with an explicit charge, but they're betting that we'll find their steaming electronic smorgasbord irresistable.  They're right, too.  I'm not even buying one of the Goddamn things, and already the saliva has beguin to well.

The truth is that Sony is in a position to make a fuckload more money than Microsoft is on their online proposition, (supposedly onerous) subscription fees or no: between microcontent, new games, the music store they've got hooked in, digital video, games like Gran Turismo where you purchase your game experience "a la car," instant, most likely highly addictive access to PS1 and PS2 games, and (if their startlingly updated Lemmings is an indicator) an onslaught of unbelievably resonant Psygnosis classics, they stand to get well in excess of four dollars a month.  It may be fair to say that the Playstation 3 owner will (in the manner of Scrooge McDuck) leap from a great height into a gigantic, articulate catalogue of digital content.

I purchased Sid Meier's Railroads! yesterday, and yes, I think you're supposed to italicize it. In any case, I'm afraid to install it. I have things I actually need to accomplish this week.

Oh, and also - this is the sight that greeted me as I entered the workplace: