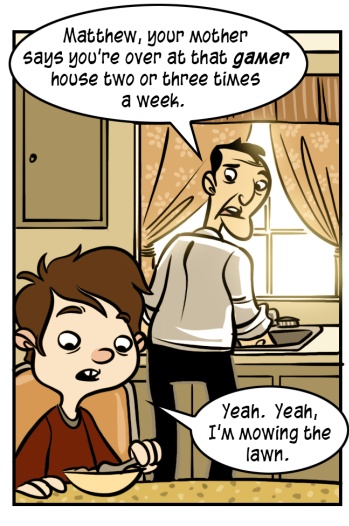 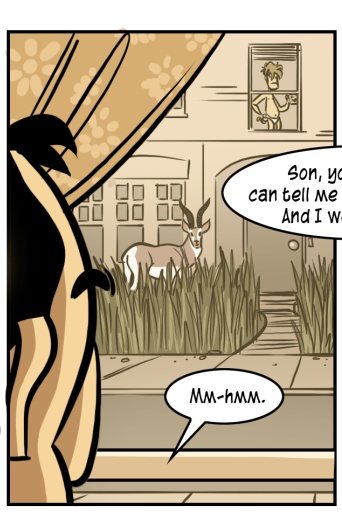 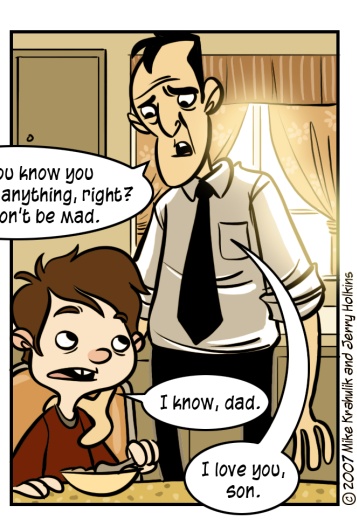 Our newest comic is available here, tenuously connected to its predecessor by thick cords of despicable continuity. We'll do what we can on our end to break the shackles of causality. Until then, hold onto something.

As I learned a few years ago, even five days in another place is enough to establish an ethereal root to it, so that when it is time to leave again one must go through a mental process to sever it. I was surprised to discover the strength of the tendril. It was really nothing like real life - every morning Bean Around The World, every afternoon Urban Thai - in the optimal, brochure version of Canadian Professional Living. It was probably this surreality that endeared me to it, the impossibility of it. Some impossible, fifth season.

I've never written for ten straight hours before. Can brains sweat? I kept getting the sense that I was moist somewhere I could not physically daub.

I will tell you this much: Canadian Gamers as a whole are pretty much getting boned at the moment, and boned thoroughly, by the exchange rate. The bone may need to be surgically removed. Canadian Dollars (called "poutines") are at par with US currency, but their games cost ten dollars more. Ten whole Goddamned dollars. The reason I make a point of it is that when I put a mere sixty dollars down on a game, I already feel as though I've been robbed at gunpoint. I have no idea how the gentle Canadian must feel about this state of affairs, where the dark analogies might travel from there. I assume they run their hands slowly along their abdomen, looking for the tell-tale signs of organ removal.

The large matches we imagined would take place upon Halo's release are never the highlight of our experience with the game. I think everyone here is playing a slightly different game, but it's wide enough to accommodate each person. I think that playing Halo 3 is, for Gabriel, merely the drudgery by which raw footage is produced to fuel his directorial ambitions. I have groups that almost exclusively just create and games - our Zombies variant of Infection is really starting to get somewhere. Some nights it's just the Rocket Races. Night for night, it's never the game I expected to be playing as I pined for release.

The best times I've had with it are probably being slotted into the Multi Team hopper with Kiko. The games are all designed for two player teams, except there are four teams total, and this acts as a Carnival Multiplier. Oddball with more teams (or even as individuals) was always great, and that's well known, but a gametype like VIP becomes something incredible as the granularity increases. It never becomes a stalemate, because there are always three targets available. Plus, in these modes, there's no push to talk - you always have live voice, which gentlemen prefer. It's essentially raw co-op - boiled way, way down - and the taste of it endures.

before it gets me down