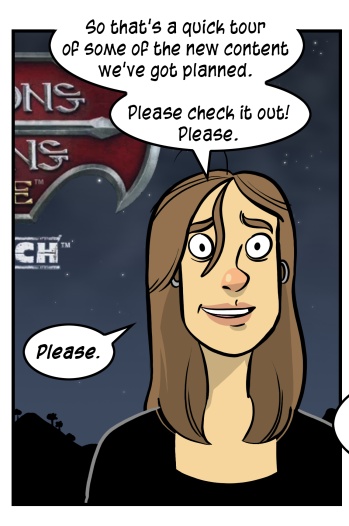 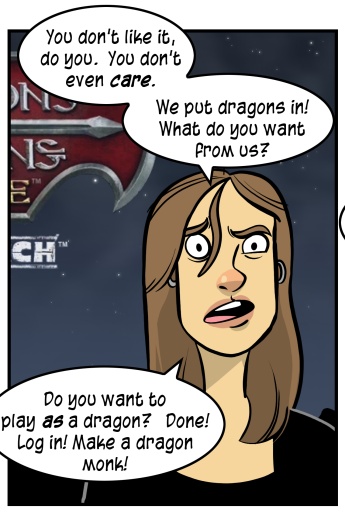 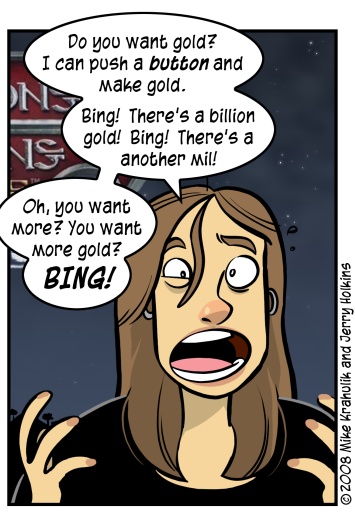 My heart went out to the woman in the recent clip for Dungeons and Dragons: Stormreach. At one point, a green face is shown. Maybe it was a jade face. Anyway, it looked like it was entrance to a dungeon that I had no interest in raiding for ancient wealth. Your dungeon entrance says something about you as a subterranean civilization, and this one said that I could avoid it altogether, and not miss much.

The reality is that it wouldn't matter if the game were completely incredible. The game could be as good as World of Warcraft, and even this would be insufficient. It would have to be better than WoW to succeed, now. I'm exceedingly curious about both Warhammer and Age of Conan, and both have chosen on multiple occasions to apply another coat of paint. With a head start, years of steady improvements, premium upgrades, world-class art and design, and hundreds of millions of dollars, Blizzard is an entrenched foe. They have a "next generation MMO" in the pipeline, but my guess would be that it's a graphical update to the existing world. There's ten million people playing it. You don't make a sequel to that game. You exult in it.

WoW is still - as we suggested more than three years ago, rescinded, and then ultimately reasserted - the apex of the genre. It does this by leveraging the Diablo template, making a game that is essentially a mechanism to obscure the loot table. It is the most humane game of its type, which is to say that it can still be ridiculously cruel.

I spent almost two hours killing Yeti for their skins last night with Kiko. I needed ten skins, and apparently these were some kind of fucking GM Yeti with no Goddamned skin on them. What is holding these Yeti together, I wonder? Their arctic resolve? Are they literally snow men? Oh, now here is a gourmet Yeti, one with a Roasted Quail, but no pelt. On and on, we slew ice devils. As a miner, I collected copper, and then tin, and then iron, and now I understand they're picking eternium in Outland. Eternium? What's next: Awesomite? You need to leave yourselves room to grow, guys.

I knew it before, and then in some moment of weakness I let my cohort twist me into this thing. I don't know how much game is here. What I do know is that they have set up a system that allows me to rent my friends on a monthly basis.

get in the ground