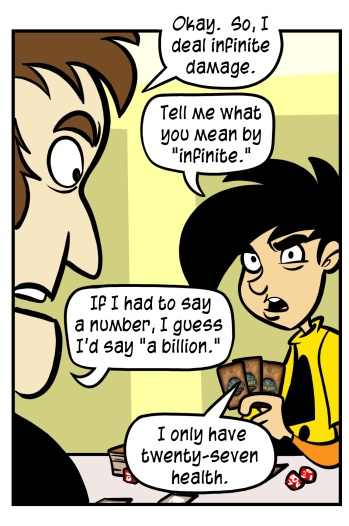 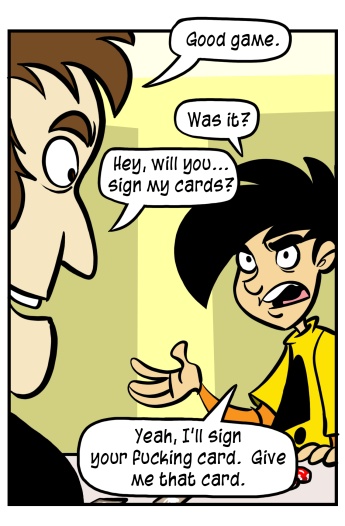 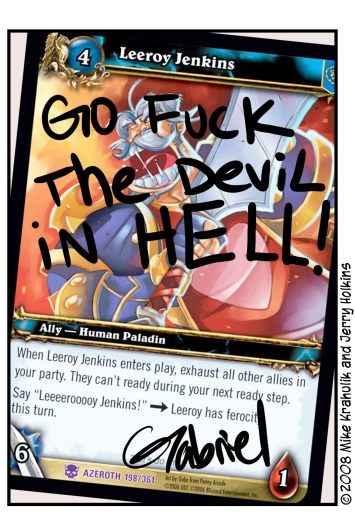 We spent the weekend at the Darkmoon Faire, or at any rate its realspace equivalent. As people who enjoy the game but don't

1. Read Boards Dedicated To It or
2. Take Part In Any Official Play,

we were exposed to outlandish strategies and truly toxic decks of possibly goblin construction. The first person I played against brought a set whose only purpose was to stymie all opponent actions, until such time as (this is not a joke) he replaced his cards with the Onyxia Raid Deck. Imagine my surprise.

We saw the same decks over and over and over and over for the three days we were there, I assume these were either "greatest hits" from previous tournaments or represented the current state of the art, but it made the experience much less organic. You could discern the entire arc of the game from the moment they placed their hero. Thankfully, that wasn't the whole of the event.  The guy who taught Gabe to play his deck showed us (in fun) some of the more out there constructions, including one that combines three cards to create an infinite damage loop. I also had a chance to run a raid deck myself on Saturday, adorned thusly:

Yes, that's correct: I was essentially cosplaying as Tycho, which almost certainly means the end is nigh. I ordered a huge skull pin from some online Goth Supply Outlet, but it didn't arrive in time. I didn't really expect it to. It's easy to imagine the employees of such an establishment, shuffling and morose, brimming with scorn for the inauthentics who might purchase a lifestyle a la carte.

I received a mail yesterday from Robert, telling us that Metal Gear Solid 4 is brilliant. I told him that Penny Arcade already had an established editorial position, and that he should go back to making me rich, but he pressed on. He says that after many hours of truly hating the game, and subsequently hating himself, he discovered that if he limited his combat options only to the tranquilizer pistol, the game began to bloom.

That's as may be, I guess. If you are not already a Kojima devotee, the first five hours of the game are absolute torture.  Imagine watching Episode One and having no love of Star Wars to haul you through it. Only it's twice as long as Episode One, and you can't just batten down the hatches psychologically and let this thing wash over you. I'm going to take Robert's advice and try to find the game coronated in every review.