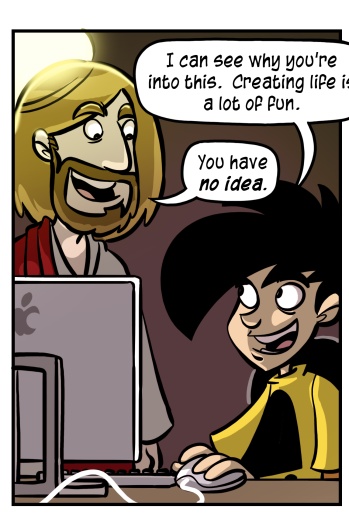 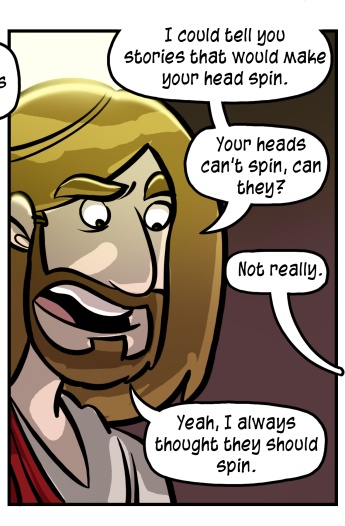 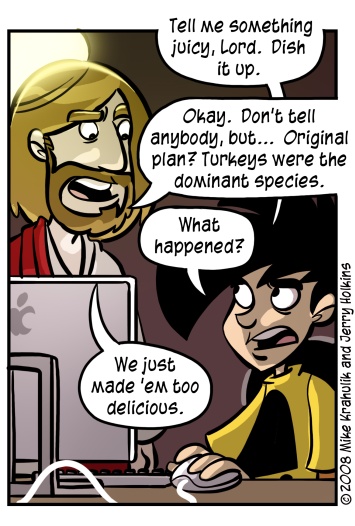 The tools to create life, once largely proprietary, are now the domain of every Tom, Dick, And Harry. We don't have the full product, so our palette was wide but not nearly infinite. Leveraging the true mechanism, one can generate a (among other things) a thoroughly terrifying Deep Crow.

It's a cool toy, and we endorse it. If you really want to see the joy such a tool can produce, though - joy in abundance - you should try the Spore Creature Creator with your child. I recognize that setting up this scenario may be time consuming: courtship, gestation, and whatnot. But Will Wright is, among other things, a dad - and when Gabriel the Younger was in the office for lunch yesterday, I got the unmistakable sense that we were experiencing something very near the product's intended purpose.

I've finally discovered the appeal of Metal Gear Solid 4, which it does everything it can to obscure for many hours. There are times when it moves directly from cutscene into player control that are frankly unprecedented. When you start pushing through radical shifts in gameplay and aesthetics, and you can't tell if one informed the other or if a single lozenge of design, story, and context leapt like Athena from a man's mind, you can find it in yourself to be impressed.

MGS4 is alternately the salvation of the Playstation 3, an argument for games as art, or the culmination of a storied franchise. Maybe it succeeds at these epic things to varying degrees, but as a piece of entertainment software it has significant problems - and these problems don't evaporate because the product acquits itself well elsewhere.

I actually like the story of Metal Gear, but it's not told well. I don't care if a cutscene is long provided that it's well paced, but these cutscenes aren't simply long, they're eternal - and they feel even longer than they are because they're pure overreach. The script is insipid, didactic, and its insights are trite. The humor doesn't work, period, and it works even less against the backdrop of perpetual war.  I'm the story guy around here.  I make up a story if a game doesn't have one.  Here, I was so starved to express any kind of volition whatsoever during these interminable slideshows that eventually I discovered a way.  I only started to enjoy Metal Gear Solid once I began skipping the cutscenes.

On the whole, I think we're probably done talking about Metal Gear.    It's clear by now that the community dialogue is mostly metatextual, having nothing to do with the game as delivered. The product is little more than icon at this point, a vessel for people's fond wishes, and there's no profit in discussing it.