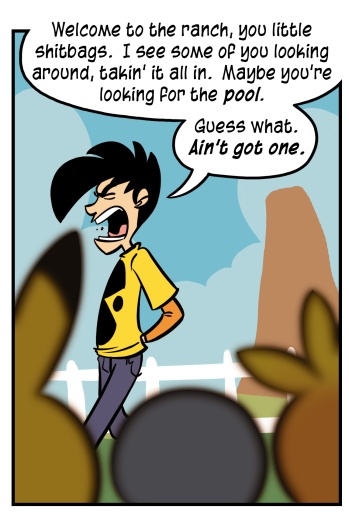 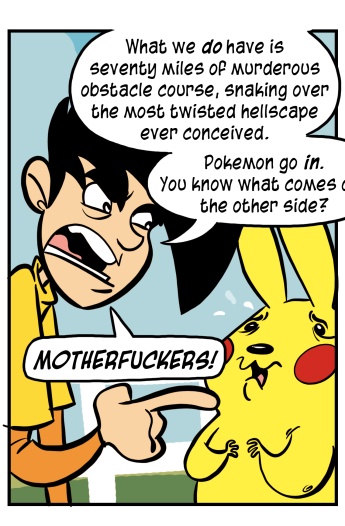 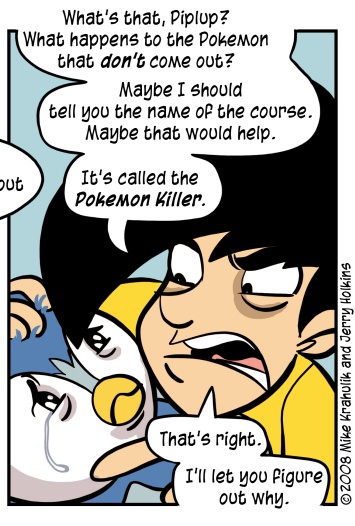 Because he is Gabriel, "My Pokemon Ranch" was swiftly purchased and installed. It is mostly a place for your Pokemon to hang out and terrorize Miis - at least, for a normal person. For others, the ranch is a kind of crucible.

- EVE Online just released another update, and the trailer is pure sex as usual, but I've figured out what I really want from them: a single player experience. The request is bizarre on the face of it, but I've entered into one of those pendulum phases where I don't value the styles of play that persistent games allow. With the assets and technology they've got on hand, they could dish up space opera in a way that reinforces their existing universe and hauls in genre apostates like myself. World of Warcraft gives me the same feeling at the moment. Both games have incredible art, are vast beyond reckoning, and present thoroughly elaborate contexts for adventure and commerce. Last time I was in Lakeshire, I thought... Man. Somebody should make a game out of all this.

- Etrian Odyssey II is exactly what I want to play right now, and it's sold out virtually everywhere I go. It's one of these Puzzle Quest situations, where the people in charge of the buying don't really know what it is, and there's a gambling aspect to their position that they can't really indulge in. The DS is this weird cross section of hardware, something like an ice core, and earlier ages of the medium keep expressing themselves through it. It's hard not to play Metroid Hunters and get the sense that you aren't playing id's classic Quake, for example - the graphics reaffirm it, but there are elemental forms of gameplay that emerge as well. Somehow, and I think you will agree if you give it a try, somehow Atlus has put together a classic PC dungeon crawl experience for the DS. It's all there, down to the graph paper you would have used to map it, only they provide that for you on the touchscreen. Yes, that's correct: the Etrian Odyssey series can be accurately described as a Cartography RPG. Here's a review if you like, and an awesome piece by Lead Head Translamator Nich Maragos on some of the translation challenges.  It sounds like the experience is very similar to the first one, but that's only a problem if you actually played it.

- With every video that drops, I get more curious about Too Human. I don't believe this is a common phenomenon. After being presented in a raw state several years ago, it's since been the focus of a lawsuit and spawned a conversation about the role of the media cycle in game development.  I think the conversation might have moved on.

What I've been trying to figure out with Too Human, and what has allowed me to harbor enthusiasm, is that I think I may have misinterpreted the game's visual metaphor. I'm of the opinion (and you may have heard this on an ancient podcast) that "The Club" didn't get a fair shake because people thought of it as a shooter, when it was really an arcade action game. It adopted the look and control mechanism of the shooter genre, and this brought with it some expectations that the game's design was never meant to satisfy. Too Human looks like brawler - it's got the wide camera, massed enemies, and air juggles we associate with (let's say) a DMC. But its RPG underpinnings - with its loot, ability trees, and armor sets - are far more Diablo. In Diablo, you click on an enemy to kill it. And I wonder if the controls I experienced in Too Human - which were clear, and direct, but not especially visceral - aren't exactly what they intended.

The game is supposedly the start of a trilogy, but it's the market that decides these things. With only a single, tentative fan, they may find it tough going.

- In case anyone was still wondering, this is what you get when two companies actually compete.