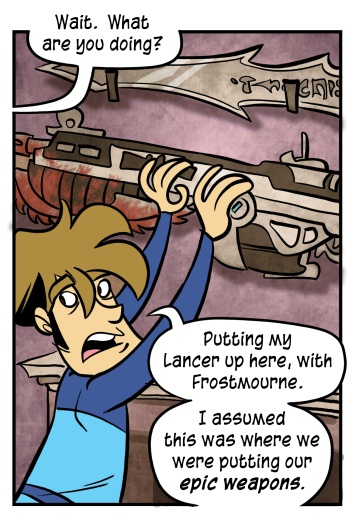 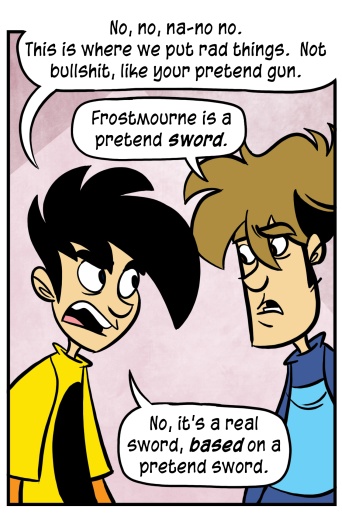 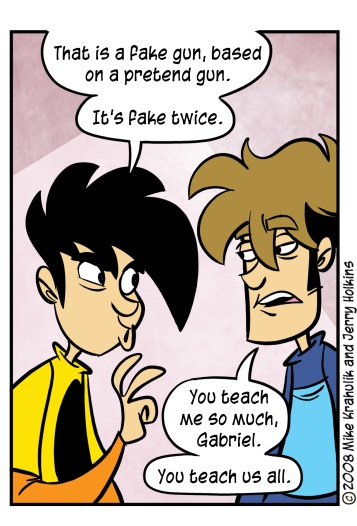 It's true: I do own the Lancer.  And Gabriel does own Frostmourne.  Well, we might say that he owns a Frostmourne. My weapon arrived on Friday, and the conversation that followed has been transcribed here.

I own the Lancer because I'm completely obsessed with Gears of War. Even on a site theoretically devoted to cataloguing my fetishes, I don't presume that you are fascinated with my bullshit and want to be exposed to an unalloyed form of it. Them's the facts, though. I never got to spend the time I wanted to with the first one, because I could never communicate its virtues to my customary associates. I had hoped the sequel would be different, but after a single online match Gabriel suggested we switch it back to Horde. He won't put himself in a position to be decapitated by some online stranger. It's precisely the opposite for me: the fear of that act drives me to excel. And when I do, just as I did two years ago, the relief is all-encompassing.

If I say something unkind about the writing, as I did on Friday, that context may be important. It's very much a Star Wars Fan dynamic, where they want Lucas or Lucas Surrogate X to deliver on the grandeur and texture of the setting, when grandeur and texture have nothing to do with the creator's intention. The Intention of Gears is to deliver an interactive summer blockbuster, a genre which does not prize language.  I'm barking up the wrong tree.  I've played against the creatures this game is actually for in public matches. If something isn't directly connected to expressing dominance, it doesn't exist.

Still. There is a point at which "the rookie" says there are a shitload of grubs down there.  Marcus Fenix corrects him, suggesting that there are, in fact, "Ten Shitloads." I want to grant that Gears of War takes place on the planet Sera, where Shitload may be a genuine unit of measurement - but that's dumb, and this line is dumb, and the people speaking are idiots, and they live in a world of dumbshits where stupidity of a form of currency.

I don't believe any of it. There are scenes that succeed, but almost all the incidental dialogue is... incidental. It's not as vigorously aggressive to the mind as Army of Two, but that's what we in the industry call "faint praise." They just don't care about this stuff, and why should they, because they're going to sell five million copies of this game over two years. I'm not saying that they're motivated by greed, I'm saying that they accomplished what they set out to do.  I'm also saying that Gears of War 2 is a literary charnel house.  And for the same amount of money, they could get writing that respects the game they made.

how weightless they must be